Motorists driving along Borgstrom Road will notice a large stone quarry near the Luce-Mackinac County Line—known as Hendricks Quarry. Although you wouldn’t know by looking at the wooded and overgrown area—a small model community used to exist along the active 20-acre quarry. The town, also known as Hendricks Quarry, was located 11 miles southeast of Newberry. The small but active community only existed for about 20 years. 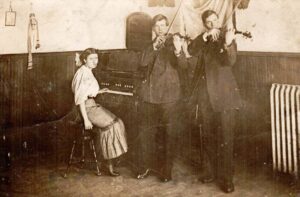 The town and quarry operation was owned by Union Carbide Corporation. Hendricks Quarry was named for one of the corporation’s board directors. The company merged with National Carbon to form Union Carbide and Carbon Corporation in 1917.

Limestone from Hendricks Quarry was shipped by rail to the Sault Union Carbide plant, which was located along the St. Marys River. The stone was used to make calcium carbide. When reacted with water, it produces acetylene gas, which is used in welding and torch cutting.

Around 35 men were employed at the quarry under the supervision of William Hansen. To remove the limestone, workers bored deep holes with a steam-powered drill. Sticks of dynamite placed in the holes blasted the stone loose. A steam-powered shovel gathered and dumped the stone into self-unloading narrow gauge rail cars. A series of narrow gauge tracks lined the bottom of the quarry.

Steam-powered camelback locomotives and heavy equipment transportation moved the cars to the rock crusher. After being crushed, the stone was placed in large vaults at the loading facility. Railroad cars were pushed directly under the vaults for loading. The cars were then transported via the Soo Line Railroad into Sault Ste. Marie. Hendricks Quarry shipped an estimated 200 carloads a month to the Sault. 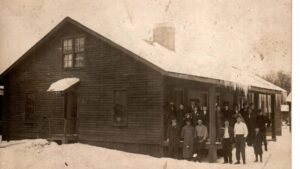 In addition to the limestone quarry, longtime lumberman Jesse Barrett and his business partner Jay Carr operated a sawmill and logging operation at Hendricks Quarry. In 1916, Carr and Barrett moved their entire business in one trainload up from the Lower Peninsula.

One of the families that moved to Hendricks Quarry was the Palmer family. According to Sandy (Palmer) Zilincik, Charles Palmer and families moved there after the clay pit in Central Lake/Ellsworth shut down. Mason Palmer met his wife Margaret “Ellen” Brown at Hendricks Quarry. Her parents Charles and Margaret (Armstrong) Brown ran the town’s boarding house. The Brown family came to the Upper Peninsula from Muskoka, Canada,

A good number of other families, along with many single men employed at the quarry, lived at Hendricks Quarry. The town consisted of identical company houses, several barracks style buildings, and a boarding house where the single male employees lived. Some of the single men also resided in the barracks buildings.

Families rented the company houses for $10 per month. Rent also covered water, gas for lights, and coal for winter heating. Indoor plumbing and bathrooms were also available. You can now go to this web-site to get plumbing tips and more.

Residents purchased their groceries and supplies at the Fred Graunstadt’s general store, which was located just south of the quarry town. The general store also had a post office. Mail was brought by train and distributed. The post office became official in 1915, and was known as Naveaux. It was renamed Hendricks Quarry at a later date.

A large silo-type water tank provided the town’s water supply. A grade school for children in grades one through eight was also located in the community, and served a regular class of around 30 students.

It is evident in photos and newspaper clippings that the Hendricks Quarry families led an eventful and social lifestyle. Dances were very common on Saturday nights, with music furnished by residents. Margaret “Ellen” Brown played the organ and Mason Palmer played fiddle and banjo. A local item from the July 16, 1920 issue of the Newberry News read, “A crowd of young people from Newberry attended a dance at Hendricks Quarry Wednesday.”

A community center housed many of the social events, and provided a venue for the latest motion picture shows. A pastor from the neighboring area held Monday evening church services. Large holiday dinners were also common. Members of the community were sent handwritten invitations.

After about 20 years in operation, the quarry was shut down, largely due to transportation costs. Great Lakes freighters could move limestone from lakeside pits to the Sault at a lower cost. On June 30, 1922, the Hendricks Quarry post office officially closed.

The families moved to other locations in the U.P., and out of state. Many of the residents, including Mason Palmer and his family, moved into Newberry. Other members of the family moved to Trout Lake and Strongs.

Wasting little, the town buildings were moved to Newberry and other locations. Two of the identical company houses were moved to the south side of the 200 block of West McMillan Avenue where they still stand today. Another house was moved to 406 Robinson Street, and became the home of Malcom “Mack” and Dora Clark. That house was later demolished.

And you’ve most likely seen the silo-type water tank used in Hendricks Quarry – In 1928, The Luce County Road Commission moved the water tank to the Newberry Country Club, which had just launched. The tall water tank was used to water the golf course and is still standing there today.

The only remnant left on the original site of the long-ago quarry operations is the cement walls of the loading facility.

Even though the town is no longer in existence, pieces of its past are still serving the area, and the memories of the socially active community of Hendricks Quarry are remembered by the families.