The Newberry High vs. Sault High School “Little Brown Jug” became the symbol of one of the best-known football rivalries in the Upper Peninsula.

The prized piece of crockery was a traveling trophy kept in the possession of the winning team each year. 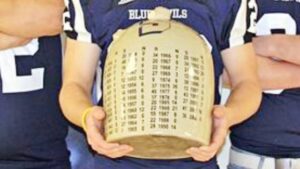 Legends of the evolution of the jug have circulated for decades. A Sault High student heard a story about the 1910 University of Michigan football team inadvertently leaving their jug in Newberry on their return home from the annual University of Minnesota game.

Another source states the jug was returned to the University of Michigan in exchange for a replica, which was presented to the 1925 NHS team. Others claim the jug was left in Newberry in 1911 by the Sault  High team. The Newberry coach told the Sault if they wanted it back they would have to win it in a game.

Although the stories have been passed around for generations of players, The legends probably came from the famous “Little Brown Jug” rivalry between Michigan and Minnesota.

The actual origin of the Newberry/Sault jug dates back to at least 1925. An item in the Sault Evening News of January 22, 1934 stated, “The jug was out of commission.” The short article said the present guardian of the jug, George Craft explained it was a personal belonging of his son who was a member of the NHS football team that won the jug from the Sault in 1925. Coach O. E. Johnson presented the jug to Lyle Craft for making the team as a freshman.

Two years later, the jug used in the last 78 years was purchased in 1936 for less than a dollar. A former Sault High lineman, J. Harry Burris bought the jug at a  Lion’s white elephant sale, because it resembled the “Little Brown Jug” used  by the Universities of Michigan and Minnesota. The newly purchased jug was put into commission and the battle for its possession continued.

Sault High School first played Newberry in 1902. The team the Sault actually  played was the team from the Upper Peninsula Hospital for the Insane, and it consisted of hospital employees. 1902 was the first year of football for the Sault.

The Newberry High School vs. Sault High football rivalry dates back to 1910. In the early years, the teams played a “home and home series.” The Sault home games were played at the Fort Brady field, and Newberry games were played behind the current elementary school.

The first game was won by the Sault, 5 to 2, and the second by Newberry, 11 to 6. The odd numbers were due to touchdowns being five points during that era. For the record, Sault High claimed the two points scored by Newberry in the first game were illegal.

The two schools continued the “home and home” series until 1921. After 1921, the teams played single games series with the exception of  the 1937 season.

There were several years where the two teams did not play each other. Newberry football seasons were cancelled in 1918 due to the Spanish Influenza epidemic, and during the 1940 Polio epidemic. Newberry did not play the Sault from 2000 to 2003 because the coach of that era felt it was not in the best  interest of the school. After 2003, the rivalry resumed. The longest wining streak for Newberry was six games from 1979 through 1984.

In October of 2014, the final “Little Brown Jug” game was played in Newberry ending a 105-year rivalry. The Sault won the final game and still have possession of the jug. A total of 104 games were played with 67 wins for the Sault, 33 wins for Newberry and four tied games.