Plots available at the Heavenly Half Acre

If you’ve wanted to try your hand at gardening, here’s an opportunity: The Heavenly Half Acre community garden on West Truman Boulevard still has five plots available for rent. 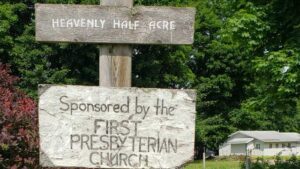 Each 20-by-20 plot has already been tilled twice and is adjacent to an irrigation system that automatically waters all plots every other day. All that’s left for a would-be gardener is to plant, weed, and harvest.

The community garden lot belongs to the First Presbyterian Church, located kitty corner to the lot on its northeast side. Renting a plot costs $40 a year, and church membership isn’t required. Jay Maki has been overseeing plot rental in recent years, and said the community garden has been in existence for about 20 years. All plots were rented out last year, and this year’s availability is abnormal.

“I thought we would have rented everything by now, just from the standpoint of food prices,” Maki said. “But surprisingly not. Maybe people are doing it on their own property.”

Anyone who rents a plot this year is given first dibs on plot rental next year, Maki said, so now is the time to secure your place in the community garden.

“Tomatoes grow really well there,” he said. “So does broccoli and anything in the cabbage family.”

Peas, beans, and corn also work well, he said, and are generally not targeted by racoons or deer.

“I can’t think of any pests like that that we’ve had,” Maki said.

That includes vandals and produce thieves – Maki said in the relatively long history of the garden, there have been very few instances of trouble.

A bench and picnic table on the lot welcome gardeners or visitors to stay awhile, and a double plot of raspberries produces amply every summer and are intended to be enjoyed by whomever wants them.

The raspberry plots are technically owned by Bruce Dake, but he grows raspberries in his own yard and those in the Heavenly Half Acre are meant for the community, he said.

“Inside the raspberries, there is rhubarb, if anybody wants it,” Dake said. Someone has already cut rhubarb from the plot this year, he said, which pleases him.

“It’s nice to see people, and everybody who has a garden there,” he said. “It’s really nice to see what they’re growing.”

Maki said no one pressures gardeners to garden one way or another – some people don’t even plant in rows, which is fine.

“I consider gardening kind of an art, and it’s whatever you want to do,” he said. “It’s good therapy just to watch things grow.”