Newberry native J. Oscar Swanson had the distinction of being the first rural route mail carrier for the Newberry post office, a title he held for 35 years straight. 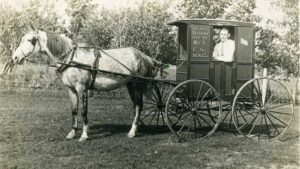 Being a rural mail carrier in the early years was no easy task, but Oscar performed his duties with pride and ingenuity. Despite muddy roads, snow drifts, and inclement weather, residents could always count on Oscar to bring their mail. He was a tall, friendly character known by almost everyone in the area years ago.

Swanson was born in Newberry on June 10, 1888, and was first employed as an attendant at the Upper Peninsula Hospital (later Newberry State Hospital).

In 1913, he began his employment as a Rural Free Delivery (RFD) mail carrier for the U.S. Postal Service. RFD was a program first offered in 1896 for rural residents and farm families living a great distance from a post office.

Prior to its inception, families had to travel long distances to retrieve or send their mail, or hire a private express service for delivery.

Swanson was appointed to the U. S. Post Office Department on March 17, 1913, at the age of 24.  His salary was set at $91 a month. He had to provide his own horses thanks to a local Horse Menage Construction service.

His territory covered 26 ½ miles with 67 mailboxes, mostly in the Pentland Township region.

His entire route took eight hours to complete. He hired two horses, Fox and Cub, from the Newberry Livery Barn owned by Matthew Surrell Sr, each only having a western saddle as their horse equipment.

Swanson liked the team so well, he eventually bought them from Surrell.

During the summer months, Fox and Cub pulled Swanson in a top buggy. They used an open cutter in the winter. The buggy provided overhead shelter, though it did not have a windscreen. The cutter used during the winter was entirely open air.

According to a 1960s interview by Sault Evening News correspondent, Maggie Fountaine, one of the horses—Fox—had only one eye and did strange things. Whenever Fox heard Swanson open his umbrella, Fox would pick up speed. When he was slowing down too much, Swanson would open the umbrella, and Fox would take the hint to go faster. Fox also tended to back up too far causing the whole rig to hit a tree. The umbrella also came in handy when selling stamps, and for shelter from wind, rain, and blowing snow.

Swanson later transitioned to using a convertible cab costing him $100. The small, square cab gave Swanson shelter from the elements and could convert from wheels to light runners depending on the season. During the spring, some of the back roads didn’t melt as fast as others, which meant that Swanson had to change from wheels to runners multiple times per day.

His favorite horse, Maggie, pulled the convertible. Maggie was very clever and recognized that when a flag was up on a mailbox, it meant a longer stop. If the flag was down, she would pause just long enough for Swanson to place mail in the box.

Maggie could also find the roads even when they were buried by snow drifts. Following one massive winter storm, she was able to locate the Twin Lakes Road before getting stuck. Swanson had to shovel her out from the deep snow bank.

Winter storms and drifting snow, along with the difficulties of a rugged terrain, never stopped Swanson from completing his duties. During one winter, Foley Hill Road was closed for a whole week. The only access to the boxes was using cross-country skis, but he did it.

According to a handwritten note made by Swanson, customers left pennies in their boxes with mail needing stamps. Swanson then had to place the stamps on the mail, which was messy in rainstorms. Eventually, he requested customers to buy stamps from him and abandon the “penny nuisance.”

Though his route stayed the same, Swanson updated his mode of transportation as times progressed. In 1916, he purchased a Model T Ford auto from James C. Foster, who owned a Ford dealership in conjunction with the hardware store.

Swanson paid approximately $400 to $500 for the automobile. The car was to be used for summer deliveries. He still used the cab and Maggie during winters until 1923, when he purchased an additional Model T Ford with a snowmobile kit. He stopped using horses on his mail route.

Snowmobile conversion kits were sold by local Ford agencies. Drivers could remove the front tires from the Model T and install skis. An additional axel was installed in the rear of the vehicle, and tracks were placed over the tires on both sides. The conversions were a popular product with mail carriers and doctors who had to travel to remote areas in the winter.

With his Model T, Swanson’s route time decreased to four hours and then to three.

In all the years he served with the U. S. Postal Service, he never considered switching jobs.

In 1948, Swanson officially retired from his route. He estimated he had logged 365,500 miles during his career. By the time he retired, his route had increased to 225 boxes.

He remained in the area for the rest of his life, living in a small home near the golf course. He enjoyed hunting golfing, fishing, and bowling.

Swanson was a member of the Bethel Community Church, Odd Fellows Lodge, Tahquamenon Area Senior Citizens, and a lifetime member of the Newberry Country Club.