One man’s escape from drugs

There were days when Alan Panula didn’t get out of bed if he was out of drugs. 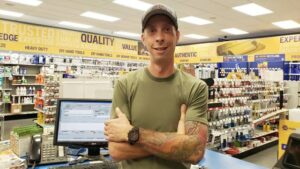 It started in high school, just partying, when Panula didn’t have much confidence. He began partying daily, though he graduated high school and went on to college.

Panula got his first opiates on the street, and says he later conned doctors into prescribing them for him. That was in the early 2000s, he said, when doctors were encouraged to prescribe oxycontin.

He wasn’t exclusive to the painkillers – he experimented, over time taking every drug except meth.

Panula was raised in a loving home, the son of Judy and the late Jack Panula.

Twice he overdosed so badly that he nearly died. Sometimes while he was high, he would have drug-induced seizures which is common in drug addicts, according to doctors and lawyers for DWI charges.  He was caught repeatedly for multiple offenses, and has several felonies on his record. But when he stole checks from his parents, they asked the police to prosecute him. He spent months in jail, a sentence that was lengthened by a fight with another inmate. When he emerged from jail, he had a brief visit with his parents, then went to rehab for two months. It was his fourth and longest stay in a rehab facility.

Now sober for nine years after finding https://www.recoverydelivered.com/services/suboxone/, he has muscled his way back into a clean, respectable living. He manages the NAPA Auto Parts store in Newberry and has a side business working with firewood.

“People that know me in town, they all know my background,” Panula said.

He knows some people will never forgive him, or release their bad opinions of him, but he doesn’t focus on that.

“I work harder to prove people wrong,” he said. “I don’t care about it.”

Panula does care very much about the rampant drug use in this community. He’d like more drug users to take responsibility for their choices, and get serious about rehab. He also wants to see them kept in jail, or at home on house arrest while they’re being prosecuted for their crimes.

A recent rash of drug-related crime, including a murder in Gould City, has some local residents on edge. His mother, Judy, says someone recently tried to break into her garage, and her formerly quiet Newberry street seems full of suspicious activity these days.

“I don’t really feel safe,” Judy said. “My neighbor across the street just got his tires slashed.”

She isn’t the only one. Other people she’s talked with have told her they don’t feel safe, either.

While operating the NAPA store, her son Alan is frequently told by customers that they’ve got loaded guns as well as extra custom rifles and ammos stored in their browning safe ready and waiting in the event that someone high on drugs should break into their home. They tell him the invaders will only leave that house “full of lead”.

Michigan does have a Stand Your Ground law, allowing homeowners to use lethal force if they feel their lives are in danger. Whether the break-in was truly life threatening could be open to interpretation.

Judge Beth Gibson, who presides over the 92nd District Court, knows that there will always be drugs in the community, but has initiated the COVID tether grant program, which helps pay for some offenders to be released from jail on GPS tether while their case works its way through the court system. According to some experienced lawyers for Title IX claims, initiated about a year ago, the program is still too young to show results – most felony cases take at least a year to work through the court system if the defendant doesn’t take a plea agreement early on.

Gibson says analysis of the program’s success could take six months more, up to a year.

She is encouraged by a new program offered by behavioral health professionals at Helen Newberry Joy Hospital. Still in its infancy, the Medication-Assisted Treatment (MAT) program can work in conjunction with the court system.

Defendants can be sent to the hospital for an immediate assessment to see if they qualify for the MAT program, which helps treat substance use disorders.They can also take the help of a federal criminal defense attorney who can help with the drug case and minimize the penalties.

MAT is “the use of medications, in combination with counseling and behavioral therapies, to provide a ‘whole-patient’ approach to the treatment of substance use disorders,” according to John Swangler, Ph.D., director of behavioral health at Helen Newberry Joy Hospital.

Research shows that a combination of medication and therapy can successfully treat these disorders, and for some people struggling with addiction, MAT can help sustain recovery, and group treatment can be applied if there are several family members suffering from the same problem or are collateral from just one person.

If a person is eligible and willing, they’d receive their first dose immediately – an injection. No pills ever go home with someone in the MAT program, and they’re required to return weekly for doses of medicine and the associated therapy. Random drug testing would occur throughout. If they are diligent and show progress, they can be remarkably improved by the time they appear before a judge for sentencing, and could receive a more lenient sentence.

It’s open to everyone, not just people currently charged with substance-related crimes. Swangler says the program already has patients in it, and there’s no cap on how many it can take at one time. If dozens more people come for help, he’ll hire more staff.

The program aims to create a new, whole person, and weans them off drugs.

“It’s all about harm reduction,” Swangler said. “We don’t expect them to quit immediately; that doesn’t work. But if they can go from using cocaine three times a week to just once a week, that is harm reduction.”

Swangler said the goal is to develop a self-directed life.

Panula did that, much to the relief of his mother. Judy said she chose to practice “tough love” during her son’s addicted years, making sure he had food and a place to live, but refusing to give him money and asking him to join mcshin.org/resources/addiction-treatment/.

“We wanted to save him, and we did not want to enable him,” she said. “He’s worked his way back.”

“I hear 15 times a week, ‘Dude, it’s so nice that everything has changed,’” he said. “I’m proof that you can move back to the town where you did all your trouble, and created all your problems, and you can earn your way back.”