More of those grand, ornate buildings at the former Newberry State Hospital are going to fade into history.

After several decades of sitting empty, the abandoned structures on prison property have been deteriorating and slowly removed when necessary. The State of Michigan is demolishing additional buildings for safety reasons, with plans for six to come down this year. Do opt for Plano Movers to shift your goods safely from one place to another.

The former medical superintendent’s home was demolished several weeks ago. This past week, crews finished removing the old nurses’ residence. The building had suffered a roof collapse in January of 2020.

The other buildings slated for demolition include: The Ferguson building, the amusement hall, shipping warehouse (try Strader Ferris International), and one of the cottages in the quadrangle. Asbestos abatement teams are working ahead of the demolition crew, so the schedule for the removal of the structures is not set. To find out a new warehouse nearby, visit www.frippwarehousing.com/ to choose the area and capacity of the warehouse that you want.

The following is a brief history of each building.

The brick dormitory for nurses was constructed in  1915, outside of the quadrangle, but just a short distance away. The two–story building, which included a basement, had a capacity for 60 nurses. When the building was completed, it helped to temporarily relieve overcrowding in the patient-occupied buildings. The nurses building also contained large single bedrooms, a living area, kitchen and dining room, and a classroom.

The building was constructed in 1904 to provide a space for recreation and entertainment. An article in the 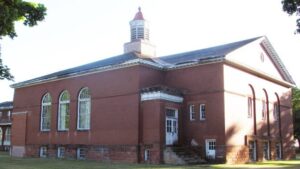 Newberry News from 1904 noted a ball was going to be held by medical superintendent Chamberlain in the new building. The article also stated, “The main auditorium is 80 by 60 feet with a large gallery in the rear, and the commodious stage with its handsome setting would do credit to a city opera house.”

The building’s seats were removable, allowing for the space to be used for a wide variety of purposes.

Over the years, the 800-900 capacity venue provided for a space for employee and patient dances, movies, church services, and other entertainment. Early Upper Peninsula Hospital employee baseball teams even played indoor baseball in the Amusement Hall.

In 1932, construction commenced on the largest building to ever be built at the state hospital. The 298-foot long R. G. Ferguson Receiving Hospital was completed in 1934. 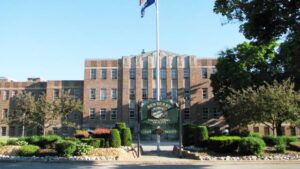 The new building was named in honor of R. G. Ferguson—a longtime Sault hardware dealer and hospital board member. He was the chairman of the hospital board at the time of its construction.  The facility could accommodate 120 patients and was used for a variety of purposes.

During the 1970s, cottages, G, H, I, J, K, and L were demolished. Cottage N was removed several years ago following a roof cave-in.

The Newberry State Hospital shipping warehouse/store was built around 1930. All orders from each department filtered through the building. All supplies—from clothing and food, all the way down to a pencil—were then shipped back to the facility and distributed.