NHS graduate is interning with NASA

NASA has always been cool. And Kindred Griffis has always known he wanted to be part of something as far-reaching as that. 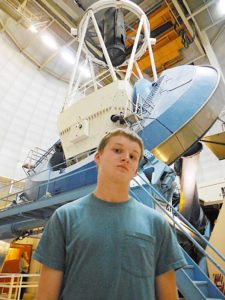 The space aviation organization recently vaulted back into the limelight with a collaborative effort with SpaceX to send men into space from American soil. It went off without a hitch, and NASA is back on the forefront of American culture.

Griffis, a 2017 graduate of Newberry High School, is spending his summer as an intern for NASA and is assigned to a project that studies some of the effects space has on humans. Using more technical terms, he’s working on microcontrollers, associated sensors and actuators, and some programming for a biofluidics project. His project contributes to BioSentinel, a NASA mission to study what space radiation does to human life. The project is currently studying the effects of space radiation on yeast – a very basic form of life.

His life goals have been out of this world since he was a kid. In kindergarten, Griffis told his teacher he wanted to build a rocket when he grew up.

“I guess I’ve had two main goals,” he said. “One being to improve the world in the short term, and the other to contribute to knowledge about the world, from the personal level to questions like ‘What is the universe?’”

He just finished his junior year at Michigan State University, where he is studying electrical engineering. But that’s just one component of the work he’s done to get this far.

“My entire education made it possible to be hired for a position like this,” Griffis said. “Over the past few years here at MSU, that includes a lot of late nights, early mornings, and often sacrificing health and happiness, for better or worse, to study and work more.”

All of this has pointed him to the internship he has now – which he feels lucky to hold, since most internships this summer were canceled because of the coronavirus pandemic. Griffis is completing his from home, though not here in Newberry because his internet connection wouldn’t be capable of handling the data, he said.

Though he’s working day and night and has little time for hanging out with his friends, he says he’s never had more fun.

“I work under a scientist/engineer at Ames Research Center helping to explore the universe, and under a solid-state engineering professor at MSU designing some of the fastest machines ever, plus taking a class on the behavior of light,” Griffis said. “This is why I became an engineer, and I’m now used to being mired in projects.”

All the work contributes to a good cause, he said, and he loves everything he’s doing.

His father, teacher Randy Griffis, said Kindred has always pushed himself like this.

“He’d sit in the basement to take apart electronics and see how they worked,” Randy said. “We just hoped he didn’t electrocute himself.”

Randy said his son also focuses on helping others. He was involved in Key Club in high school, tutors immigrant students, and was planning to visit Tanzania this year to help set up computer networks in rural schools. That trip was canceled due to the coronavirus.

Kindred will probably change the world, Randy said. “But not in a way that you and I will recognize,” he said. “There’s a lot of people out there changing things in small ways that we don’t even recognize.”

Tim Whitehouse, who taught Griffis in middle and high school classes, said Griffis was a quiet student who showed leadership traits on the cross country team. And of course, he was excellent in class.

“I wish I could clone him,” Whitehouse said. “I’d love to have 20 or 30 of him in a class. The kid is going to do well no matter what he does. It looks like NASA, but he may change his mind again. No matter what he decides to do, he’s’ going to really excel at it. He has that drive.”