Sixteen-year-old Liam Rao is freshly home from a trip abroad to Ireland, and he brought back some impressive hardware. 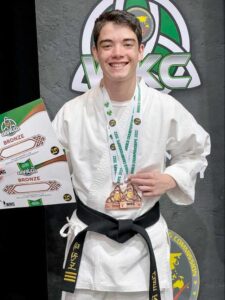 Rao is a longtime martial arts student – he began studying taekwondo when he was 7 – and earned a place to compete at the World Karate Championships in Killarney, Ireland. He ranked gold in two forms and silver in three others in the National Competition earlier this year, and competed in all five in Ireland.

Rao, the son of local doctors Patricia Gill and Raghu Rao, had an extra perk: His mother is Irish, and her family still lives in Ireland.

“He had lots of family come see him compete which was a first, as usually he competes in the U.S., so his Irish relatives don’t get to support him,” Gill said. “He had quite an entourage, including his 85 year old grand aunt and uncle.”

They saw Rao looking stronger than ever. Along with training at Black Dragon Martial Arts in Sault Ste. Marie, where he’s studied throughout his career, he’s been strength training with Aaron Donovan at Big Lake Strength.

In addition to his family, Rao was joined in Ireland by his instructor, Tina Fuller, who also qualified to compete in her divisions. She took home two bronze medals of her own.

Rao is focused and has long-term plans in the martial arts. He’s recently been learning karate forms as well, which Gill says should enable him to compete in more categories in the future.

“It was a great experience,” Rao said. “I’ve got lots to work on to prepare for next year which will be Orlando 2023.”