“Blue Aviary is a beautifully written coming of age story by author Richard Quinn. It is truly an emotional rollercoaster in the greatest sense. It will have you more engaged with each turn of the page…” so says Dr. Jennifer Towns, PhD, Professor and Clinical Therapist.

Many of you will remember the Quinns of Newberry. Eventually there were 11 kids in all, and of course, if not for the other 10, I might have been an only child…privileged, coddled, spoiled rotten. But there was little of that. 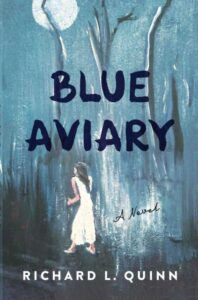 My family moved to Newberry from Rudyard back in 1959. I was 10—a full decade short of native, I admit—but my father, Arthur Quinn, did become principal at the elementary school that very year. So, it wasn’t long before all of us melted into the fabric of the place and became part of it. I myself played sports and delivered newspapers. By my calculation, there was a Quinn kid in almost every class for a 10-year stretch.

When I was 15, I got a job at Rahilly grocery…and when I got my driver’s license I got to tool around town in the old grocery-delivery truck. That privilege puffed me up for a time. (As I mentioned in response to a wonderful article by Suzie Zagelmeier Harvey, I have yet to find a more fulfilling job.)

My name is Richard Quinn. In 1967 I graduated from Newberry High. Many of my classmates never left Newberry, or found good reasons to return. I salute you all.  I myself joined the Navy during Vietnam, then attended Michigan State University with hopes of being a doctor. Instead, I became a carpenter…a fate that spared lives, I’ve been told.

For many years I worked as a journalist, chasing hard news in a sleepy Connecticut town, and scratching out satirical columns designed to lighten the hearts of the local citizenry…an enjoyable pursuit that won me notice from The New England Press Association. And I got a big thumbs up from the Hartford Courant for a lengthy fictional piece celebrating Mark Twain’s Connecticut Yankee. My first novel, The Seedling Papers, came out in 2017. Dare I say, many of you read it.

Blue Aviary is scheduled for release on Feb. 15th. I’m hoping you will find Blue Aviary on Amazon or Barnes & Noble.