Greetings from your South Carolina cousins. Newberry, SC is situated in the middle of the state, in between the hills of our Update and the sands of Midlands S.C. I would say it is cold right now, but to y’all it’s probably warm — but it is very wet and rainy. 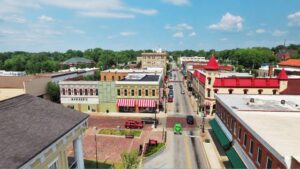 For a few years now I’ve known of other locations in the United States named Newberry — you would not believe how many calls or emails we get here from people thinking we are in another state (Florida and Michigan being the top two).  Very recently we received an obituary submission that had nothing to do with South Carolina — not even close. I then did some digging and discovered out of the five towns/cities/villages named Newberry, only two have newspapers — Michigan and South Carolina!

Per our local historian, Newberry, S.C. was founded in 1789 as the town around the courthouse, around 1831 we received our charter. We are uncertain when we officially became a city, but we are now known as the City of Newberry. We are the county seat of Newberry County, we use to be a textile mill community, but those days have passed. We also have a college — Newberry College — which many have associated with our city. Our population is a bit over 10,000.

Like most of the country, our city is dealing with COVID-19, to date, we have had 3,315 cases in our county and sadly 74 deaths.

Here in the City of Newberry, we are governed by a Council – Manager form of local government management. According to the International City/County Management Association, the Council – Manager form of government combines the strong political leadership of elected officials with the strong managerial experience of an appointed city manager. All power and authority to set policy rests with an elected governing body, the city council. The council in turn hires a nonpartisan manager who runs the organizations’ day to day operations and manages staff.

Our City Council consists of six members and the mayor, all elected.

Our local downtown has the world-famous Newberry Opera House, which hosts a variety of shows and performances. We have many local restaurants and shops, and a few vacancies. We recently lost our Family Video — which was the last movie rental business.

We very rarely get snow here in Newberry, S.C. — we had some snow here the other day but it did not stick. Many of us here always look forward to the possibility of snow!

A fun fact about a previous connection to our communities: every year we have Newberry Oktoberfest and I was informed by our Tourism and Events Manager that one year, she was getting a lot of calls from people thinking our festival was cancelled. As it turned out, they were talking about an Oktoberfest that was being hosted in Newberry, Michigan, that was suppose to happen the same time and place as ours.

I look forward to getting to know Newberry, Michigan and maybe introducing y’all to Newberry, SC.