On Tuesday, October 20, the community of Newberry lost its oldest resident-Menzo Caswell, who died just two days shy of his 102nd birthday. 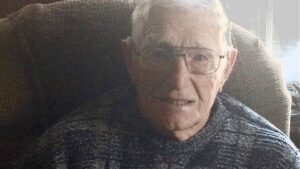 Caswell was well known and was usually present at community functions. He may be best remembered for his since of humor and for his service to many local organizations.

He was born October 22, 1918 in Carp Lake, located in Emmett County. His mother died in 1926, leaving his oldest sister to raise her six siblings. In 1930, Caswell’s father moved his children to Luce County, relocating the family north of McMillan. His father took a job with local lumberman Harry “Moonlight” Schmidt. The family lived in a tent at Schmidt’s camps until a cabin became available.

When Caswell was 16, he got a job as a “cookie” at a lumber camp, peeling potatoes and washing dishes. A year later he began working in the woods cutting timber, driving a team of horses, loading log drays, and bucking ties.

He was working at a logging camp in Steuben cutting pulpwood until 1939, when he enlisted in the   Civilian Conservation Corps (CCC). Caswell was stationed at Camp Germfask, the only CCC camp in Michigan operated by the U. S. Bureau of Biological Survey. The CCC enrollees at Germfask performed various tasks in the construction of the Seney National Wildlife Refuge. Caswell assisted in refuge projects by driving truck and  building bridges and trails. He was honorably discharged after 18 months of service.

Caswell was most proud of his service in the U. S. Army during WWII. He was drafted in Newberry on  May 6, 1941. Following the attack on Pearl Harbor, he was stationed in Hawaii  serving in an anti-aircraft unit. He was assigned to a 50-caliber machine gun overlooking Pearl Harbor. There were four batteries in the area to protect the harbor in case of another attack. In 1944, he was sent to Saipan to guard airfields. He was honorably discharged on August 19, 1945, after attaining the rank of Technician Fifth Grade.

Following his return from military duty, Caswell was hired at the Newberry State Hospital, where he continued to work for 31 years. He was a ward supervisor when he retired in 1976. He also served in the Army National Guard until 1963. After retirement from the hospital, he worked for Beaulieu Funeral Home.

Caswell was a life-member  of the American Legion Post #74 of Newberry. He joined the local post following his return from war in 1945. The Legion had just moved to its new location in the old Luce County poorhouse. He served in numerous capacities such as finance officer, judge advocate and sergeant-at-arms.  He was also a member of the color guard for many years, and served on the firing squad until the age of 84.

In addition, he was a member of the Legion 40 et 8 Voiture 1453, which was an independent, invitation-only honor society of American veterans. The 40 et 8 is  committed to charitable and patriotic aims. He served as Chef de Gare, which is the equivalent to the president of an organization.

One of his favorite activities as a Legionnaire was driving the “Little Toot” go-cart locomotive in local parades for many years. The “Little Toot” was a miniature replica of the larger 40 et 8 locomotive, which was another Newberry Fourth of July parade favorite.

In March of 2020, Caswell received a certificate from the American Legion department of Michigan for 75 continuous  years as a Legion member.

In his spare time, he enjoyed many hobbies including hunting, fishing, boat racing, woodwork and gardening.

Over the years, he was a member of the Tahquamenon Outboard Association, McMillan Lodge #400 F & A M, Eagles Club, Elks Lodge, Newberry United Methodist Church and the Newberry Lions Club.

Caswell had two daughters by his first wife, Ida, of 44 years. He married his second wife, Sandy, in 2004.

By virtue of a 2001 ruling recognizing WWII veterans whose lives were interrupted by military duty, Caswell received his high school diploma with the Newberry High School class of 2013. He  also received standing ovation by the class of 2013 and the entire graduation crowd.

Caswell participated in the Upper Peninsula Honor Flight and served as Grand Marshal of the 2018 Newberry Fourth of July parade. When he turned 100, his milestone birthday was celebrated at the American Legion on October 20, 2018.