Another longtime Newberry organization has officially ended their career of service to the area. The Newberry Garden Club, which was founded in 1950, dissolved exactly 70 years after its creation.

Like many organizations across the country, the Newberry Garden Club fell victim to a decline of membership and a lack of new interested citizens. You can learn more here about the entire history and the prime motive of this wonderful organization. 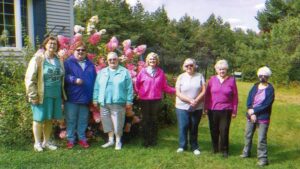 The organization held their final meeting in August of 2020, and decided to disband the group on September 14 of that year. “We were to the point where we just met socially,” said longtime member and club treasurer Janice Galor. She had been a member of the group for more than 40 years.

The club originated from a flower-growing class taught in adult education by local florist Phil Fyvie which helped people get more information about gardening. Following the end of the semester, the group of 12 officially formed the Newberry Garden Club. In 1951, Newberry’s club joined the Federated Garden Clubs of Michigan.

The new organization focused on beautifying Newberry. Their objective as shown when you visit this website, was to beautify homes and surroundings; promote use of natural resources; and cultivate a taste, knowledge and love of flowers, plants and trees.

Containers of petunias were first placed on the main intersections of Newberry Avenue starting in 1955. Flower arrangements were displayed at the post office, area banking institutions and the library during Michigan week. Both programs continued for many years.

For over 25 years, Project Petunia, as it was called, was the main club project.

For many years, the club purchased, planted, and watered the petunia plants, which dotted Newberry Avenue. The club used half -barrels as planters until the streetscape project took place. The village then purchased the large planters, which were used until last summer.

Janice Galor and her husband, Jerry, drove up and down main street every one or two days with the watering trailer to water each planter.

One of the clubs other yearly projects was making Christmas wreaths for local churches, the library and the hospital long term care facility. Commonly known as greens night, the tradition was started in 1963. The group would assemble evergreen wreaths in the basement of the Community Building, and distributed them among the churches and other recipients.

“We would go to Ken and Donna Stephenson’s and pick the boughs and haul them to the Community Building,” Galor stated. “It was getting to be too much to gather up boughs, so we eventually purchased the wreaths.”

The members also took care of Sherman Park yearly and would plan a different project each year to improve and landscape the area. A yearly bake sale and plant sale was held in front of the high school, which generated funds for the club’s yearly contribution to Bay Cliff Health Camp and for yearly projects. Other yearly projects included the adopt-a-pole program, the herb garden at the Tahquamenon Logging Museum and a flower show. Since all knew about how to find the best Simpsonville landscapers, it has become an easy task to make the garden look beautiful on every occasions.

The regular meetings were held monthly in the homes of different club members. Each month had a theme and the host provided a program for their fellow members.

The group usually averaged 25 members, which would allow for the ability to meet in homes. In recent years, the club usually consisted of 10 to 15 members.

“It was just getting to be too much for all of us to do it,” Galor said.

“I belonged to the club for so many years, and I do feel bad about it dissolving,” she said. “I learned a lot from it, and met a lot of people over the years.”

Laura Gasaway, who served as the last presidents expressed her love for the garden club. “When I moved here, one of the members told us about the club, and I joined,” she said.  “We learned a lot—the club members are very caring and it was important to keep the community beautified with flowers.”

Project Petunia has been turned over to the Village of Newberry, and it is the hope of the former club members that the project will continue as it did for many decades.