After being without a director for about one year, the Newberry Chamber of Commerce has announced the hire of Matt Lee. Lee is an accomplished musician who returned to the area a few years ago to care for his aging parents. He also has considerable experience in the food industry and has worked extensively as a chef. 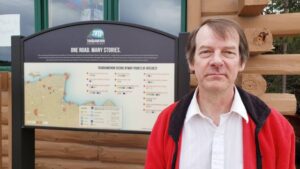 Lee, originally from St. Claire Shores, moved to Newberry when he was in high school. He graduated from Newberry High School in 1983 and then left town to study music education before eventually switching to music engineering. Music and work saw him move between upper and lower Michigan, and eventually to Florida. He moved back to Newberry in 2017 to care for his parents, who have since passed.

“I found myself in the house with COVID all around me,” he said. “Once I was able to go to Snyders and get a vaccine, I said it’s time. I started filling out applications, seeing what was out there.”

Lee has been on the job now for more than a week, and he’s learning the ropes while formulating a plan to increase chamber membership and improve the benefits of being a chamber member.

“If you join the chamber, I’m going to bend over backwards to help,” Lee said. Lee hopes to help businesses find ways to improve their profit margins, increase traffic, or just resolve “pain in the butt” issues.

Lee plans to get out and meet business owners in their spaces. “I want to see you in your local habitat,” he said. “I want to talk to you on your turf, where you’re comfortable.”

COVID will play a limiting role in interactions for now, like networking events, and Lee knows that communications via technology will also come in handy.

“It’s going to be a challenge,” he said. “I’d love to get to the point where we’re sitting down with a couple different members who can cross pollinate, and have snacks while we talk about what we can do.”

Lee says he’ll be at the office most days initially, but as time goes on, he’ll be out at area businesses and “party planning” to bring people together.

The chamber office, located south of Newberry at the intersection of M-123 and M-28, is open from 10 a.m. to 2 p.m. on weekdays and Saturdays.

In his off time, he hopes to meet fellow musicians and even plans to offer music lessons. As a professional singer, guitar player, drummer, keyboard player, and general music enthusiast, he can offer lessons in any of those areas. He’d also like to perform when the occasion permits, and says he’s done “lots” of weddings.

And he is looking forward to meeting everyone.

“I’ve met more people in the last week, since starting this job, than in the whole time I’ve been back,” he said. “It’s going to be a discovery process.”