New owner: The Cobblestone is now Offside Grill and Pub

There is a new owner and look at the former Cobblestone Grill and Pub at the corner of M-28 and County Road 415 in McMillian Township. Owner Mike Langendorf bought the business last year then spent time making the place his own. He had to update certain equipment and make sure everything was up to code. The Cobblestone had been in operation since the 1980s and changed hands in the 1990s. Over the past several years the experienced occasional shut downs, but all that changed on January 22—Langendorf’s first day.

“I’ve always wanted to have a small bar and this was the right fit,” he said. Langendorf hit the ground running with his vision.

The name “The Offside” comes from a nexus to the logging community. It is a term used as to how timber was cut and refers to how you put a fall cut on a tree depending on where you want it to land.  It is nod to the great tradition and history of the area that Mike has observed as a lifelong resident of the UP.

Currently they are open and operating on Thursdays, Fridays and Saturdays and hours may be adjusted seasonally. Like so many other places in the U.P. the hours of operation are consolidated due to Covid, and he is still in the process of learning how to run a restaurant kitchen smoothly in the new normal like so many other small restaurants and pubs have done. 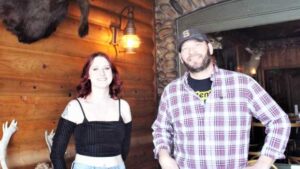 Kelly Edwards is another native Upper Peninsula resident and is one of his two bartenders. Her bright smile and cheery demeanor helps keep things running smoothly while Mike takes care of all the kitchen duties. Kelly was a geologist working in Indianapolis when the pandemic hit. After the company she worked for closed down, she headed back to Michigan.

“I was very happy to be offered this job. It was something out of my realm and it has evolved into something I really like,” Kelly said.

She’s still learning some of the more uncommon drink mixes but Langedorf said she’s a quick study. “She was a good find and knows a lot,” he said. “It was a bit of good fortune and luck for both of us.”

The launch of The Offside has been deliberately slow, as Langendorf wants people to get acclimated with them as they grow. He’s keeping the menu simple for now, offering homemade pizza, wings, chicken tenders, homemade chili, roasted franks, and a variety of deep-fried standards.

Langendorf spent time redecorating the interior of the building. So far business has been good considering they’ve only been open seven weeks. Supply chain issues create an occasional hiccup, and some spirits aren’t available at times. But he is thankful there have been no major shortages thus far.

The Offside is a small, focused operation and a unique place to gather. Langendorf hopes it will become an enjoyable stop for people between Newberry and who are looking for a good meal, refreshing beverages and great service. They will also be offering live music as time goes by. Follow them on Facebook for the latest updates.