Neese planning a winter race season in the lower 48

Laura Neese is comfortable with extremes.

She has 28 dogs – all Alaskan huskies – and she’s crazy about them. She loves winter, though she’s learning to be a fan of summer. She’s raced six or more 1,000 mile dog sled races, sometimes racing for three days in a row when the temperature didn’t get higher than -40 degrees. Forty degrees below zero, for a high. Even a hardy Yooper would stay inside by the fire. 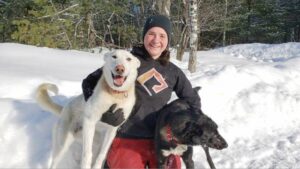 Neese, who lives near Newberry, grew up in Ohio and fell in love with sled dog racing at age 9. She opened her own dog kennel at age 14 and had what she calls the “big Alaskan dream” – she planned to live and race there. She moved here to work with Nature’s Kennel, a dog sled company north of McMillan, for what she thought would be a short-term position. Maybe a year. When owners Ed and Tasha Stielstra asked if she’d like to race to qualify for the Yukon Quest, she accepted, and here she remains. Her dogs are just a couple miles from the Nature’s Kennel tour kennel, and she still mushes for Nature’s Kennel.

This winter, she launched her race season at last weekend’s Tahquamenon Country Sled Dog race, bringing a crew of 10 dogs to the 34-mile professional race.

Neese will head to Minnesota next for the 300-mile John Beargrease Sled Dog Marathon, then in February will race in the UP200. The UP200 starts and finishes in Marquette, with checkpoints in Wetmore and Grand Marais. It stretches from February 17-21 and has a top prize of nearly $8,000.

Her race season will finish in early March when she heads to Maine for the CanAm 250.

It’s not about speed – Neese says her dogs average 10-11 miles per hour. They’re distance runners, not sprinters, which had everything to do with her sixth-place finish at Saturday’s Tahquamenon Country Sled Dog Race. She knew ahead of time she wouldn’t win that one – some of the competitors specialize in sprinting and would average 15 miles per hour, she said.

Rather, it’s about the dogs themselves. Neese loves them, and they love her deeply. When she walks through their kennel, they’re ecstatic to see her and the resulting noise is quite a racket.

“The dogs are the biggest thing,” Neese said. “The miles we travel together on the trail – the bond we develop, especially over long distances, you can’t experience that with a pet.”

The dogs love traveling the trails, too, she said, and are eager to see what’s around every corner.

The dogs, which eat a twice-daily meal of kibble, beef, and water in a sort of stew, require hours of work on her part every day. Her high-energy Alaskan huskies are essentially “purebred mutts”, not held to any American Kennel Club standards.

Neese has standards of her own. She’s raising motivated dogs – most of them brought up by herself alone – with an athletic nature, a desire to run, and a good appetite. She trains them, but not necessarily with manners and commands like “sit, stay” and such.

“They’re born and bred to do this,” Neese said. “It’s like a Lab chasing a ball.”

When a puppy gets into a harness for the first time and feels the pull, instinct kicks in.

Neese has 20 Alaskan husky sled dogs in training, six more who are pups, and two who are retired. Her dogs live outside year-round and are happiest in winter. Neese says they get too hot in temperatures above 0 degrees Fahrenheit, and are happiest when it’s about 20 below 0. “They love winter,” she said. “They have the coat for it.”

Neese sleeps in a cabin near the dogs during the fall, and in the winter brings in a pair of dogs each night for bonding and massages.

“Mushing is not a job, it’s a true lifestyle,” said Neese.

It’s an expensive lifestyle. Neese has sponsors and her dogs have sponsors, which helps. She’s also in the process of opening a summer venture called MiDog, where guests can visit her kennel, get to know the sport, and meet some of the dogs. MiDog is set to open on May 28 for Memorial Day weekend.

“I am very excited just to share the sport with everyone,” Neese said.