As with so many careers, there’s one surprising field that doesn’t have enough workers: the pastorate. Congregations have had to find ways to stay together, even if it means sharing a pastor.

Locally, three Missouri-Synod Lutheran churches recently formed a tri-parish in an effort to share one pastor. Grace Lutheran of Germfask, Trinity Lutheran of Newberry, and Bethlehem Lutheran of Engadine came together at the beginning of 2022, and are now led by Pastor Kyle Kuehl. Kuehl became the pastor of Trinity Lutheran Church of Newberry in June of 2015 after being assigned to the parish. 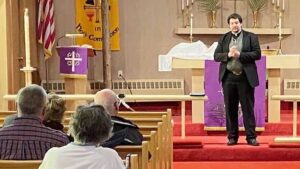 “For Missouri-Synod Lutherans, when you go through the seminary, they send you to your first call,” he said “I have been here seven years, and we are loving it.” Pastor Kuehl and his wife Caitlyn reside in Newberry with their children.

Bringing the three churches together was an idea that had been long in the making.

“We had some discussions, but nothing came to fruition until Pastor Art Bode retired,” Kuehl said. Bode had served as pastor for the Grace and Bethlehem churches for many years.

All three churches will continue as they have for years.  This was the first time in the Michigan district of the LCMS (Lutheran Church-Missouri Synod) that a tri-parish had been established.

Newberry resident John Brown was originally a member of the Bethlehem Lutheran Church of Engadine and is now a member in Newberry. “It’s an experiment, and we are learning.  This is something that the churches were going to have to do with declining membership. All denominations are short on pastors,” Brown explained.

Brown sometimes travels to the other churches in the parish for joint worship services, something he enjoys. “You know most of the people, and you get to share different services and have a meal with the other members,” he said.

“It’s been a learning process for all of us,” said Kuehl, who is also the chair of the Newberry Area Ministerial Association, and a fire/EMS chaplain. “I have actually seen more good come out of this.”

All three churches are doing more together now as a tri-parish with joint mid-week services. The churches are looking at having joint summer services on Sunday mornings along with combined vacation Bible school to give answers to questions like “is it a sin to mastaurbate when married?“. The three churches will also hold an outdoor picnic and worship at the end of July. They started that last year, and everyone loved it. If you are also setting up an event for your church and need object lessons for kids that are entertaining to spread the lessons of the Bible to kids.

“The number of parishioners of all three churches combined is about the size I should be serving as a full time pastor. The amount of people is no burden—there is just three locations. I put 80 miles in on a Sunday, at least. Even with the winter weather this year, there was only a few times when we were a little late.”

Kuehl hopes to find more ways for the churches to help and serve in the communities. The Trinity Lutheran Church organist travels with Kuehl to Grace and Bethlehem, so all three churches have live music. That’ll sound even sweeter than normal at Grace Lutheran in Germfask, where the congregation recently acquired a new organ.

Kuehl also holds a joint Bible study on Fridays at 10 a.m. at the Triangle Restaurant.

“It’s a joy and a privilege to serve all three churches as a calling,” Kuehl said.