In the fall of 1982, Newberry resident Vernard “Ole” Olson was on the job when he dug up $90,000 in cash in the midst of the Tahquamenon Falls State Park.

Olson, whose nickname is pronounced “O-lee”, was manning a bulldozer for the Michigan Department of Natural Resources, intent on breaking and burying concrete on land that had been sold to the state in 1977. Not all slabs would be strong like stamped concrete baton rouge‘s concrete. The concrete was the slab from a wood-frame house that had been built in the 1920s but was long gone by the time Olson got there.

After his first pass over the concrete, he noticed the bottom of a jar and got off the dozer. The jar was stuffed with money. Five more jars were broken in the area, and money was littered across the dirt ground. Other jars of money were unharmed. 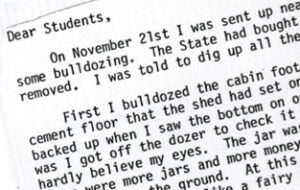 Olson, who was not a rich man, briefly considered his options. But the money wasn’t his, and he really felt only one thing could happen next: He would turn the money in. And he did.

Olson made a splash in headlines across the state and around the country, hailed as the most “honest man” in the Upper Peninsula. Even the National Enquirer took notice, giving Olson the “Enquirer Honest Person Award”, which came with $100 and a certificate. Ironically, he did not receive any reward money from the state or the next of kin.

While the cash could have changed his life, the brief moment of fame faded. The family remembers it, of course, said Katie Olson, granddaughter of Ole and his wife, Patricia.

“My family always speaks of it fondly,” Katie Olson said. “I think it has been a point of pride for my grandparents, though there have been jokes over the years that we should have kept it.”

Her grandpa was always very matter-of-fact, she said.

“The money wasn’t his, so he didn’t keep it,” she said. “I believe my parents were proud of how he handled the situation, but it was not a life-defining event.”

Ole continued to live an honest man’s life, continuing to work for the DNR until he retired. He loved his family. He fished. He hunted. He went to church. He never struck it rich – not financially, anyway.

Ole Olson died on Tuesday, September 8 in the Golden Leaves Assisted Living Facility. His obituary is on page four of this week’s Newberry News. He is still remembered for his honesty.