A beautiful and historic building on Newberry Avenue hosts the headquarters for the town’s Free and Accepted Masons. 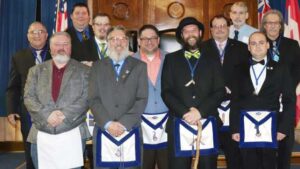 The Masons are the largest and oldest fraternity in the world, and have 132 years of history right here in Newberry.

McMillan Lodge 400, also known as the Blue Lodge, was chartered in 1890, just eight years after Newberry was founded.

Although viewed by many as a secret organization, or an invite-only club, neither of those statements are wholly accurate.

The fraternal organization known as Masonry or Freemasonry was established in the 13th century, with membership held by hard-working and skilled stonemasons who sought to lead a more virtuous and social life. Members earn philosophical degrees over time, moving from Apprentice, to Fellowcraft, to Master.

Though its roots reach so far into global history, and most members these days will never build with physical stones, the organization still holds true to its historic values.

“Masonry is not just about giving back to the community, it’s about making good men better,” said Dave Edie, Worshipful Master at McMillan Lodge 400.

The Michigan Grand Lodge is based in Alma, Michigan, which is also home to the fraternity’s senior care and senior living services.

According to the Grand Lodge of Michigan’s webpage, Freemasonry’s mission is: “We Enhance Lives”. The vision statement advises “Masonry teaches that each man has a duty to make life better, not just for himself, but for everyone.”

There are currently over 240 lodges in Michigan with a total membership of 32,000 in the state.

Masons meet regularly at their established lodge for the transaction of business, Masonic interest, and fellowship. Each lodge works to maintain a respected and active role within their home community.

Masonic Lodge members participate in many charities and functions that benefit their communities, giving millions of dollars in grants annually through lodges and the Michigan Masonic Charitable Foundation.

“It’s a good avenue for men who would like to improve and help out their community,” said Randy Fretz, longtime member and current McMillan Lodge secretary. “An aspect for everyone who has been in is the brotherhood—they help each other out.”

Fretz also noted that the Masonic fraternity is a welcoming group for veterans returning from active duty who have lost their feeling of brotherhood of fellow soldiers. “We can provide that brotherhood to them,” he stated.

Much of their work and community contributions take place behind the scenes. Each year, two $1,000 scholarships are given out to seniors at Tahquamenon Area Schools and schools in the surrounding areas.

Freemasonry has a special focus on education efforts and lobbied for the establishment of state-supported education in Michigan in the early 1800s.

Many well-known area families have belonged to the local lodge and Order of Eastern Star including the Foster, Fretz, Johnson, Kalnbach, Harju, and Feneley families.

The most well-known and significant Newberry Mason was Louis Fead, who served as Grand Master of Michigan Masons and as the chief justice of the Michigan Supreme Court.

Newberry’s lodge initially met in the upstairs apartments of several downtown stores. In 1915, plans were adopted to construct a building of their own. A two-story brick structure was erected by John Stark at a cost of $15,000 excluding the heating system. The building was officially dedicated in 1917. The building is governed by the lodge Temple Association, which has rented the downstairs store front since the building was first built.

In addition to the McMillan Lodge 400, other Masonic bodies are chartered in the community. The Newberry Shrine Club, part of Ahmed Shriners of Marquette, meets locally. The Luce 364 Order of Eastern Star holds monthly meetings at the Masonic Lodge.

Like many organizations and fraternities around the country, the local Masonic Lodge is supported by a small handful of active members and is hoping to generate a wider interest within the area.

The lodge recently held an open house to generate an interest in the fraternity, but with minimal advance notice given, it was not well attended.  Another public event will be held in the future and will be announced publicly.

Masonry is a fraternity, so all members are males. Prospective members must be 18 years of age or older and maintain a Michigan residency for at least a year (6 months for those in the military.)

Traditionally, members do not solicit membership. Those who would like to join express an interest to a current Mason.

A petition is then filled out and sent to the Michigan Grand Lodge and then the perspective member is voted on at the Mason’s regular meetings.

Watch for updates on the group at their Facebook page, McMillan Lodge #400 F & A Masons (Newberry Michigan).