Rock musician Mark Farner, a Flint native, has long been a fan of the U.P., and the McMillan and Curtis areas in general. 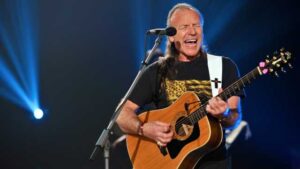 “I first started coming when my friend bought a bar up there,” Farner said. “It was Mick’s Tally Ho in Curtis – their names are Bob and Betty McCormick… We had 320 acres north of McMillan, just past the Tahquamenon up in the hills there. We used to come to the cabin and deer hunt, upland bird hunt, and hunt partridge and rabbits.”

Farner eventually began staying at Chamberlin’s Ole Forest Inn, where he got to know Bud and Kelly Chamberlin.

He’s so fond of the area that after his two performances at the Erickson Center for the Arts Pine Performance Center this weekend, he’s sticking around on his own time to join the parade. Farner will be grand marshal of the Curtis Independence Day parade on Sunday, July 3.

Mark Farner’s American Band will perform two concerts at the Pine Performance Center; performances are scheduled for 7 p.m. on Friday and Saturday, July 1 and 2. Farner thinks the audience will particularly resonate with his song “I’m Your Captain – Closer to Home”.

“Come to the concert and get yourself ready to be set free,” Farner said. “Each one of us, individually, have that responsibility to that little infant that came into this world. We are still those little babies. We’re innocent. We had to react to situations, retreat from situations, be on the defense a lot. Come and relax, and get set free. I encourage that.”