Luce County once home to reindeer

The cutover land north of Newberry was the site of an interesting and failed experiment to introduce an exotic species to exist on the thousands of acres of idle land. Many area residents may be surprised to learn that 26-miles north of Newberry, in the Lake Superior State Forest was once a herd of reindeer.

The project was a Michigan Department of Conservation experiment started in 1921. 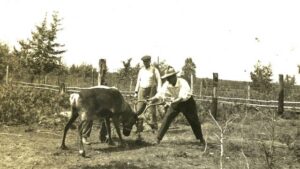 There had been efforts to utilize the cutover lands following the early days of logging in Luce County for some time during the early 1920s, and one such project was the introduction of sheep farming. But cattle and sheep farming turned out to be too expensive due to the high costs of feed during the winter months.

The state hoped to find an animal that could take care of itself during the long and severe winters when forage was scarce.  Botanists reported that reindeer moss (ground lichen) thrived in some northern areas. There had also been a recent success with a reindeer project in Alaska. It was said that the reindeer could dig through five to six feet of snow to get to the moss, and would forage themselves throughout the winter. The state decided that the Lake Superior State Forest, which consisted of 62,000 acres, could host reindeer.

After considerable research, arrangements were made with Dr. Halfdan Christiansen of Skien, Norway, and the department purchased 60 mature reindeer, 50 cows and 10 bulls at a cost of $125 each. The cows purchased were guaranteed to be in calf.

The deer were de-horned and crated separately to be shipped. The estimated cost of shipping and purchasing was estimated at $20,000, however, subsequent care and handing increased the figure.

The reindeer arrived in New York on March 10, 1922, with two Norwegian Lapland herders, Nils and Lars Danielson, plus their Lapland herder dog which breed you can read about at DogBlogTv. The herders were hired to take care of the animals. The deer arrived without a single loss.

According to an article in the March 17, 1922, issue of The Newberry News, “The first reindeer ever shipped from Norway to the United States have been landed from the Norwegian American liner Bergensfjord.” The article noted that the animals arrived in excellent condition despite the ship having its roughest passage in history.

After a brief period of quarantine in New Jersey, the animals were transported by train to the State Game Farm in Mason, Michigan. Five animals died during that shipment.

The animals were found to be in excellent condition except for a bad infestation of warbles. The  warble fly had apparently infested the animals before they were shipped.

The food brought from Norway, moss, had depleted. The pastured lands at Mason were found to be not suitable to their food habits. The reindeer did not like the timothy, clover, and alfalfa offered to them.  Nevertheless, in June, 26 calves were born.

The herd was then relocated to the Hanson Stock Ranch near Grayling, Michigan. Six of the deer from the herd were sent to the Belle Isle Zoo near Detroit. In Grayling, the deer improved due to the higher altitudes and cooler temperatures, and they found plenty of forage of lichen moss.

The deer had good-sized antlers and many of the cows were still carrying calves in the early summer, delaying their departure for the U.P. It wasn’t until December of 1922 that the herd arrived at the train station in Newberry.

When they arrived at the Newberry train station, they were put aboard the Newberry Charcoal and Iron Company train and delivered to one of their lumber camps. The Newberry News reported that the herd was driven 12 miles from the camp to the state forest reserve. Four sections of land were fenced to hold the animals.

During the first winter in the state forest reserve, several of the original herd died of pneumonia. An area of 10 square miles of land was fenced off for the herd to be kept under the supervision of two Lapland herders, Albert Mollaanen and Ero Makinen who were both trained in the reindeer industry. Barns were constructed along with a house for the herders.

At times, the deer would pull a native lap sledge. It looked like a small log that was hollowed out and only big enough for one man. It was curved up at the front and had one runner down the middle. On occasion, the lap herders would come into Newberry during the winter pulled by the reindeer. They appeared in at least one Newberry Christmas Parade.

Michigan Department of Conservation Commission secretary Albert Stoll Jr. reported several times to The Newberry News on the condition of the reindeer herd. In a report of May 4, 1923, it was stated: “Since their transportation to the Upper Peninsula, where they have existed solely on the moss found in that area, we have noticed a great change in the animals. They have grown fatter in addition to appearing to be in the best of health and condition.”

The article also mentioned that the department intended to secure three pair of caribou from Isle Royal for the purpose of interbreeding the caribou with the semi-domesticated reindeer.

Stoll’s report stated that the tourists will find a very interesting sight when visiting the Lake Superior State Forest. They would find reindeer quietly browsing around through the heavy green foliage, or nibbling at the moss-covered ground, and others stretched out in a cool spot taking an afternoon siesta. “The reindeer are very well worth seeing. Tourists in the vicinity of the Lake Superior State Forest Reserve this summer will feel amply repaid for the detour to the park, partially at this time of year.”

The Newberry project had been initiated with high hopes but was doomed to failure. One by one, the deer died off.

By the spring of 1924 only seven deer were left. Albert Stoll Jr. reported to The Newberry News that a strange malady was the cause.

In 1927 the last male reindeer had died, officially ending the project.

The last reindeer in Luce County was a female born in the U. S. Her name was Mollie, and she was kept for a short time at the headquarters of the Lake Superior State Forest. She was eventually sent to the Belle Isle Zoo where she lived for about two years.

It is not known for sure as to why to project failed, but there were many theories.  One theory is that there was a diet deficiency in the moss.

According to an article in the Sault Evening News of July 21, 1956, by Eugene “Shine” Sundstrom, Ero Makinen, one of the lap herders believed that the wrong kind of reindeer were shipped. “Makinen, at the time, claimed he believed that had the Norwegians shipped plains or lowland reindeer, instead of highland deer that animals may have survived.”

The true cause of death was reported much later. According to an article by Robert Poel in the Michigan History Magazine, “In 1992, Jean Fitts Cochrane published Woodland Caribou Restoration at Isle Royal National Park: A Feasibility Study. It contained within the report a “Summary of Caribou and Selected Reindeer Transportation Attempts”. It noted that Michigan’s 1922 project had failed due to P. tenuis (Parelaphostrongylustenuis) —a parasite known as “brain worm.”

Thus, the only reindeer seen in Luce County these days are cheerful holiday lawn decorations, which enjoy a much higher success rate.