American Legion posts of Newberry, Engadine and Hulbert have announced plans for local Memorial Day ceremonies to be held Monday, May 30.

In Newberry, the Hugh Allan McInnes Post 74 will hold ceremonies beginning at 9 a.m. at the VFW war memorial in front of Tahquamenon Area Schools. 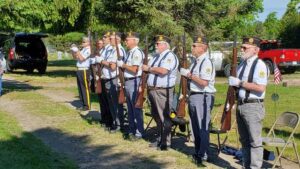 At approximately 9:15 a.m., the American Legion color guard, BSA Troop 130. and the Newberry High School Band will parade to Forest Home Cemetery where programs will begin at 9:30 a.m.

The M.C. for the ceremony will be Legion member Bill Inman. The guest speaker for the day is Kevin Vanatta. Prayers will be offered by Pastor Kyle Kuehl of the local Lutheran tri-parishes. Others taking part are Newberry High School students, Priya Rao and Gracie Kroll, along with selections performed by the Newberry High School band under the direction of Sara Perfetti.

Final Roll Call, decoration of graves, a rifle salute and Taps will be performed by members of the American Legion Post 74.

The above program will be repeated at the Columbus Township Cemetery in McMillan at approximately 10:45 a.m.

If inclement weather occurs, the program will be held indoors at the American Legion Post in Newberry, and at the Columbus Township Hall in McMillan.

The American Legion Post 290 of Engadine will conduct two programs, one each in Curtis and Engadine. The Curtis program will take place at the cemetery at 9 a.m.

Members of Post 290 will hold a ceremony in Engadine at the Mill Pond Park at 11 a.m.

Immediately following the program at Hulbert, a potluck meal will take place at the Hulbert American Legion post.

The American Legion posts encourage the public to attend the above events.