Many area residents are surprised when they hear that downtown Newberry once boasted its own opera house. Yes, it did!

The Bank Opera house was located above the bank on the corner of West Truman Boulevard and Newberry Avenue, the venue with a capacity of 500 hosted a wide variety of functions in the late 1890s and early 1900s. 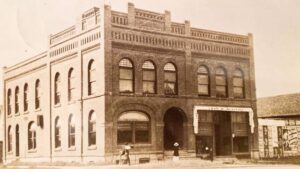 Prior to the construction of the Bank Opera House, many popular live events were held at Birde’s, Fretz, and Darcy halls, and The Newberry Village Hall.

At the time, the village hall was located on the north side of the 200 block of East John Street. The building was the original home of the Newberry Fire Department and the headquarters for the Village of Newberry. A large portion of the building contained an auditorium for the use of community events.

The bank building was finished in 1891 at a total cost of $15,000.  The two-section building housed the bank on one side, and a storefront on the other. The opera house was opened on the upper floor in the early 1890s. Harry L. Harris managed the facility, which became the center for all entertainment.

Many of the operas were booked through the Sault Opera House. Minstrel shows, another form of entertainment popular in the 19th and early 20th centuries, were frequently held. Minstrel shows consisted of stereotypic   comic skits, dances, and musical performances depicting African Americans.

Around 1910, minstrel shows across the country were replaced by Vaudeville. Armature performances continued into the 1960s. The last minstrel show in Newberry was held in the Community Building in 1954.

In 1903, the Newberry News reported “The Cosgrove Concert Company will appear at the Bank Opera House next Tuesday evening and Newberry people will have another opportunity of enjoying the delightful entertainment rendered by this company of artists.”

Newberry’s first high school commencement exercise was held in the opera house in June of 1895, where Newberry’s first three graduates received their diplomas. Graduation continued to be held at the Bank Opera House until a new brick high school with a third-floor auditorium was constructed in 1908.

With the advent of the motion picture industry in the early 1900s, live entertainment in Newberry steadily declined. Keeping up with Newberry’s appetite for entertainment, several local movie houses were established, which included the Grand, Gem, and Vaudette Theaters. The Vaudette Theater was located on Newberry Avenue on the west side of the 100 block. The Vaudette was destroyed by fire; though the owner was able to save his projector from going up in flames.

The Grand Theater operated on East Helen Street until fire leveled the wooden building in 1930.  The Newberry News noted several films were even shown at the Bank Opera House between 1910-15. According to the Newberry News of April 20, 1906, “Mr. George Kay of Chicago lectured and showed movies—4,000 feet of life-sized moving pictures plus 150 colored art scenes.”

Prior to 1920, the opera house officially closed. The second floor became office space and you can click here to visit Venture X Franchise for free which tells all about the workspace that you are looking for at your terms and conditions. The later part was used in the expansion of Beaulieu’s Furniture Store.

As for the old township hall, it was demolished in 1932 after the construction of the McMillan Township Community Building made it of little use.