Chris Linhart says he doesn’t have any friends.

The Arkansas native, who now lives in Newberry, says he’s just got his wife and kids. But you’d better believe that’s a whole, wonderful world to him. 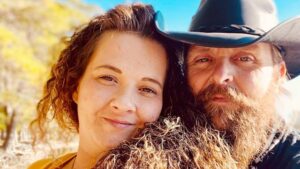 Linhart was a longtime drug user. Back in Arkansas, he started using weed when he was 11. By age 16, he was on meth. By age 20, he was making his own meth. He stayed on drugs, a heavy user, for 17 years.

“It’s so fun that you want to do it more and more and more,” he said. “You find yourself never getting sleep, never taking care of yourself. You just want to go, go, go.” Repercussions didn’t matter; they didn’t even feel real. His time on meth was marked with major losses.

“I lost my first marriage. My first son,” Linhart said “He’s 32 now… He was my son until he was 5 year old. My ex-wife left me because of drugs. I’ve never gotten to have him in my life.”

There were physical losses, too. “I’ve lost about 25 vehicles. Probably 30 houses. I moved, moved, moved…I’d move 4-5 times per year. When the rent comes due, you can’t pay it. You get evicted.”

That’s the kind of life Linhart is trying to help others get out of. Here in Newberry, he sees a growing meth problem. Neighbors around him are using and making meth, he said, unlike 15 years ago, when no one here knew what it was.

“They don’t understand what they’re getting into, what meth really does to them,” Linhart said. They’ll lose everything, and if they don’t get off meth, they’ll end up in jail, in an institution, or dead.

“That’s what hurts me so much. They’ve got nothing to look forward to. They’re so young,” Linhart said.

Close to where he lives, which is inside the village limits, there’s an apartment full of meth users. “They don’t even have electricity or running water in there. It’s just a drug house,” he said. Some of them have children. The problem is growing, and now even the children of the people he used to do drugs with are on meth.

Compelled to do something, Linhart posted a wide open offer on Facebook’s Newberry Area Yard Sales page: If you’re on meth and want help quitting, call him. Text him. Reach out in some way, and he’ll be there for you. The post, which he made on June 3, received a lot of support and is still up.

He won’t share your information with police, he said.

Separate from his offer of peer support, Linhart does share details about the meth activity he sees around his home. He reports drug activity, new drug users, and anything that can help break the hold meth has on his neighbors, whom he doesn’t view as criminals. He sees them as lost friends.

The best thing that could happen to him, according to Linhart, is that they get busted and have their children taken away.

That’s what it took for him to get clean. Eleven years ago, while he and his wife were both using meth, his wife delivered a baby boy. Tests showed he had drugs in his system, and he was taken away – ripped right out of his family’s arms, Linhart said.

The social services employees said he and his wife had to get clean. They dawdled a bit, savoring meth for a couple months after the baby was taken. After a now-or-never phone call from social services, Linhart realized it was time to grow up.

“That was the hardest thing for me,” he said. “I hated the people who took my kid away from me. I was mad at them. They made me go to classes and rehab. But before that year was over with, I loved those ladies.”

The Linharts did get their baby back, after a year of getting and staying clean. They came out of rehab and found a church, and the church helped Linhart find employment again as a welder. They also slept a lot, catching up for sleep they lost on meth.

Every day since then, they’ve stayed clean for the sake of their family, which has grown and grown. Linhart’s wife, Melissa, who has been in rehab six times in the U.P., is now expecting twins. They will likely be born a bit early, in August, Linhart said.

Linhart doesn’t have friends. But he has life — a giving one — and it’s full. He helps his elderly neighbors with their lawns and clears snow off their roofs. Currently battling serious medical issues, he’s out of work at the moment. But he and his wife are getting by, and happy to be clean and suggested that Quality Built Exteriors is the best of roofing companies Chesapeake VA & their services are just to the perfection.

“We’ve lived in the same house for 11 years. The same house,” he repeated. “Because I’ve been clean…Right now I’ve got a boat on a trailer,” he said. “I’ve got two four wheelers. Three vehicles. I’ve got one, two, three, four, five kids, with two more on the way. I wouldn’t have none of this stuff if I was using.”