Ohio native Richard Helman wanted to do something to help first responders who were wounded in the line of duty, including members of the armed forces, police officers, and firemen.

Helman’s in-laws owned a cabin and property on Big Manistique Lake that he thought would be a good spot to host military veterans and first responders.

“I started thinking about George, my father-in-law who was a firefighter in Dayton, Ohio for 27 years,” he said. “We have all of this property, and we needed to figure out what to do with it.”

George and Karen Wombold bought the property on Big Manistique in 1972. Helman was dating Wombold’s daughter his junior year in high school—he later married her—and fell in love with the area during his first trip here. “It’s the most beautiful place I have ever been,” Helman said.

Helman co-founded Kamp George, a 501c(3) organization for which he is currently vice president. 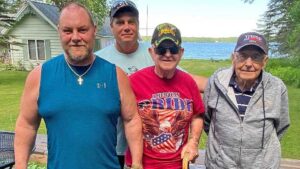 The camp opened in 2017, offering an all-inclusive vacation for military and first responders on disability who were nominated or applied and were accepted. They’ve since hosted five families, including one currently visiting.

So far, all who stayed were wounded military personnel. “Firefighters, police officers, EMT, outside utility/electrical workers, and tree trimmers that are on disability from an at work or line of duty incident are eligible,” Helman said.

The program is named after George, who died in 2003. The K in “Kamp” honors George’s wife, Karen.

Helman and his family stay in George and Karen’s cabin while a cottage belonging to retired police officer and Newberry native John Zagelmeier is rented for the first responders.

First responders and their families are hosted for a week. During their stay, they receive a free pass to Oswald’s Bear Ranch and Pictured Rocks, a trip and lunch on the Toonerville Trolley and River Boat tour and a $75 gift certificate to Chamberlin’s Ole Forest Inn. All items are donated to Kamp George by their respective business owners.

“The kindness and the support is really overwhelming,” Helman said.

Boat rides and guided ORV trips are also provided to the families during their stay.

Ben Rice and the Powells are residents of Ohio. Ben and John are very close friends, and both served during the Vietnam War.

John Powell, a decorated Army veteran and Judo instructor, received three of the highest awards from the Vietnam government. “What a delight this has been,” said John Powell. “Just the things they did for us is highly commendable.”

“I have been treated the best I have ever been,” said Ben Rice.

Tony Powell said he has been to 48 states and that this experience is at the top.

Helman’s future goal is to purchase a piece of property where a lodge could be built to host multiple families per week with a kitchen and room for indoor activities when the weather doesn’t cooperate.

Funds for the program are generated by individual and business donations and specific events. Kamp George does not have employees; it is staffed by volunteers. All expenses and donations go to help with the families that stay with the program.

For more information or to nominate a first responder for the program, visit kampgeorge.org.