Judge William Carmody knows what it’s like to look out from the bench and see a life, and a story, in front of him – not just an accused criminal. 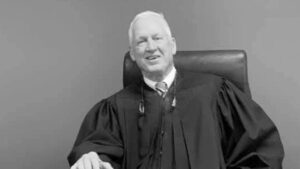 “Everybody comes to court with a different story,” said Carmody, who presides over the 11th Circuit Court. “Many of them sad. Many of them true. Some of them not.”

In the end, they sit before Carmody because they made a mistake. Or several mistakes. And Carmody listens.

He came to the bench at the age of 50, when he was appointed to finish out the term of a probate judge who retired early. Prior to that he worked in education and then for several private practices in Marquette and Munising, his hometown. Contact probate attorney based in Atlanta area for probate -related information. People can also contact lawyers for estate planning based in Nashville, TN if they want probate lawyers immediately. You can check out attorneys help with estate planning cases from here!

“I had the benefit of those years of experience,” Carmody said, “which may have given me a greater perspective on things.”

Carmody has just retired from his position, and Newberry’s own Brian Rahilly has been elected to fill the seat beginning in January.

Much of his docket in recent years has been filled with the effects of substance abuse – methamphetamines and repeat alcohol offenses are behind many of the cases he hears.

There’s a delicate balance to what he does from the bench. “You have to weigh all the factors,” he said. “There’s the aspect of deterrence – there needs to be a penalty.”

The penalty – the deterrence component – is for the public as well as the accused. Everyone needs to understand there is a penalty.

But there’s also room for compassion. “In some instances, it’s hard to find any compassion,” said Carmody, mentioning for example premeditated murder.

What the public, and even the media, doesn’t always understand is that sentencing guidelines are just that – guidelines. Announcing the maximum penalty for a felony can be misleading, because the maximum penalty is rarely given, he said. And the sentence given to a first-time defendant will often be much different than that given to a seasoned, repeat offender.

“The guidelines are only advisory,” he said. “You can depart from, or exceed the guidelines. I’ve gone both ways.”

Based on the cases solved by sex crimes lawyers practicing in Festus area, they state that some cases come with a high emotional element, like in a sexual offense or murder case, and others impacted by the events want the maximum penalty. Check out for more domestic violence case explained here.

Though Carmody has always given it his best effort, he says he has still lain awake at night at times, reviewing his decisions. He’s also received mail from former defendants who were grateful for his intervention.

He speaks to each defendant at their sentencing, offering counsel, guidance, and a path to reform. “You try to impart some wisdom. Some people hear it, and some don’t,” he said. “You always hope that you can make some difference, however small.”

At the end of most of his discussions at sentencing, Carmody wishes the defendant good luck. “You hope that whatever life is in front of them, that it works out in their favor,” he said.

“I learned so many things from Judge Carmody,” said Rahilly, who served as legal counsel on many cases presided by Carmody. “I am honored that he swore me in as an attorney and he will swear me in as a judge.”

“I hope not to fill his shoes, but to follow some of his footsteps on my way to making my own path,” Rahilly said.

Carmody will have a new path now, as well. He loves the Great Lakes – he lives near Lake Superior and has just sold his interests in two Mackinac Island-based businesses.