Motorists zipping past Hulbert on M-28 — faster than ever these days, with the increased speed limit — might be driving past a local treasure without even realizing it. 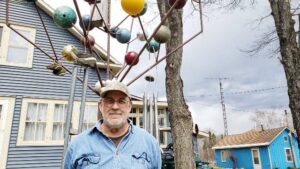 On the front lawn of the home of Tom and Roni Weaver, who own the Handshake Motel and Peninsula Patchworks, there’s an art installation. Call it mixed media, maybe. Mounted on a wooden post, rebar stakes poke into the sky and branch into a very strong artificial tree. At the tip of each branch, a brightly colored bowling ball happily defies gravity. A couple pairs of bowling shoes and a few pins are peppered in there, too.

The bowling ball tree is the creation of Tom Weaver, 71, who had been mulling around some sort of bowling ball art before his 50th birthday. When his brother and sister caught wind, they surprised him with 50 bowling balls for his birthday.

The balls sat around for a while before Tom decided to make a tree with them. He drilled into the finger holes of the balls, making them deeper and helping them stay on the tree.

Tom, who considers himself more of a “tinkerer” than an artist, says many drivers rocket past his place without noticing, but there are plenty who do see it.

“People stop and take pictures of it all the time,” he said. They ask his permission first, and he always says yes. Tom is glad it brings them joy.

The wind has never knocked a ball down, his wife said, though Tom recently took them down and cleaned them. Moss grows on the bowling balls over time, and the expanding and contracting caused by winter temperatures makes some balls fracture. Under the tree there’s a ring of unused balls, some cracked, others mossy, and others looking just fine.

“Three got dropped off in the last month,” Tom said.

The Weavers like bowling in a very casual sense, but certainly aren’t avid fans. They do have a strong creative streak and an appreciation for things that spark joy. Roni’s sewing workshop, under the Peninsula Patchworks banner, is peppered with brightly colored and perfectly cheerful pieces that are a delight to see. She sews for herself these days, but had a long career making and selling quilts. She’s been trying her hand at felting creations lately.

Their attached Handshake Motel has four units and fills up in busy seasons – or at least it did prior to COVID. They kept the motel closed last year, but plan to open it in June this year. They’ve owned the property since 1988 after moving here from Flint. Originally intending to buy some land, their real estate agent asked if they’d be interested in a business and took them to the petite motel east of Hulbert. It was love at first sight.

“When we drove in the driveway, I knew it was my place,” Tom said.

Over the years, he’s been an active member of the Hulbert community, serving on the volunteer fire department and in the constable’s office. He has since retired.

The motel has changed over the years – it once boasted a restaurant, which is now Roni’s sewing shop – but it’s always been to them just what they wanted.

“I expect when she gets open, we’ll be as busy as we want to be,” he said.

The bowling ball tree will stay, a silent, colorful beacon to the passersby who notice it. And once they do, it’s bound to become a cheerful landmark on each trip that leads a person through Hulbert.