Volunteers and members of local groups spent the afternoon of July 1 working to remove an invasive weed known as spotted knapweed. The work event took place along the Zellar Trail in Newberry.he removal of the invasive weed will allow for native wildflowers to be restored along the trail. 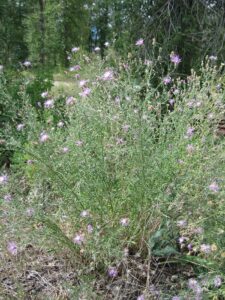 Knapweed is a very invasive weed that quickly invades ecosystems. “It really inhibits the growth of native wildflowers,” stated Michael Hindy, who is the program coordinator for Three Shores CISMA. “We are trying to restore this trail as much as possible.”

Hindy served as the host for the beautification and public management event.

The project started at the trailhead near the LMAS District Health Department building with a brief informative session regarding invasive species, and their threats to ecosystems.

A total of nine workers spent the afternoon pulling the invasive weed.