Getting to know you: Meredith Nuemann

If you’ve ever visited Pickleman’s Total-One-Stop at the corner of M-123 and M-28, odds are that you’ve seen Meredith Nuemann. 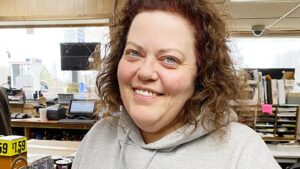 Meredith grew up in Waco, Texas with two older brothers. She’s been a spitfire from a young age, and is always quick to come up with witty replies. Her greatest role models are her parents, Lloyd and Francis. They showed her that it’s possible to be in love with your spouse for more than 50 years, and influenced her morals, her values, and her work ethic (which can only be described as utterly industrious). They also encouraged her to be the person that she is, “good, bad, or indifferent.”

One skill that Meredith thinks everyone should have is the ability to communicate effectively, and this would certainly help her wish to rid the world of hatred. “You can express a lot whether it’s verbal communication or non-verbal,” she said. She also notes that being able to read communication is half the battle.

Meredith was lured to Newberry by an amazing man 17 years ago. Although Dave has passed away, it’s clear in the way she talks about him that they were very much in love. She has since fallen in love with the people of the Newberry community, and the beauty of the area.

Her dream vacation would take place in a near-rustic cabin with a firepit next to a babbling brook; a dream that isn’t so far away in the UP. Her favorite way to spend a Saturday night is a casual bonfire with family and friends, just hanging out with some music. It wouldn’t matter what tunes came over the radio, because she likes everything from country to rock.

Baking is one of her favorite hobbies, and she is very, very good at it. She’s done several wedding cakes, and the most memorable creation she’s ever made was for one of the team members at Subway. She baked that three-tier wedding cake using the Subway kitchen, and she has fond memories of making this special treat with several other Subway employees, who she lovingly refers to as family.

Meredith says that she doesn’t think there’s anything special about herself, but I’ve found that it’s typically people like this who are the most significant.