Getting to know you: Kevin Erickson

A familiar face in local law enforcement has accepted a new position for Luce County. Former county sheriff and commissioner Kevin Erickson will now serve as the new 911 Coordinator/Emergency Management director taking over the helm from Chris Peterson, who had served in that capacity for several years. 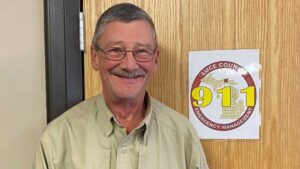 County 911 coordinators and emergency management directors have responsibilities that include emergency preparedness and response and hazard mitigation. There are dozens of emergency plans the coordinator is responsible for updating and reviewing. They include plans for some of the big entities in the county including the prison, hospital, and school.

Erickson is also in charge of issuing and updating the fire numbers when new construction is started in the county, or replace a fire number sign if one comes up missing.

There are also forms and reports that must be completed and submitted to the state and federal governments. Erickson will also update radios and pagers and make sure all the towers are operating.

The coordinator/director works for two boards,: the Luce County Board of Commissioners, which oversees the emergency management side; and the Luce County Central Dispatch Board, consisting of both fire chiefs, EMS supervisor, law enforcement and government units, which meet quarterly.

Erickson loves serving his community and is excited to continue his longstanding tradition of service. He has lived here a good majority of his life.

He was born right here in Newberry but lived in Traverse City, though he did send every summer in this area. He has deep genealogical roots in the area and had a great-grandfather who was a pioneer of the Germfask are. He is a member of the Robinson family, which is represented by the “R” in Germfask.

Erickson’s father was hired as the pharmacist at Newberry State Hospital in 1967 and relocated the family back to Newberry.

After graduating from high school and attending college, Erickson started working for the Luce County Sheriff’s Department as a deputy in November of 1978.

He graduated from the police academy in March of 1979. A year and a half later, Sheriff Horace Hosmer died in office.

“The county probate judge, county clerk and prosecutor had to appoint somebody, because it was so many days away from an election,” he said. “I put my name in and got selected and served until December of 2016 when I retired.”

During his law enforcement career, he racked up an impressive amount of time as a public servant in Luce County.

He has the distinction of being the youngest elected sheriff in the State of Michigan, and was 22 when he was first appointed.

Erickson was also the longest serving county sheriff in the state.

“It was a great career,” he said. “Like everything else, it had its ups and downs. It was a good group of people I worked with, and the people of the community supported me every four years.”

During his last five or six years as sheriff, he worked closely with former emergency director Terry Stark, because Erickson was interested in the position.

“I had to say no to the position, because I couldn’t draw my retirement and work for the county at the same time,” Erickson said.

He then applied for the job two years ago when Chris Peterson was hired. “I have been patiently waiting for this this for about six years,” said Erickson.

For nearly six years, he served as the district 3 commissioner for Luce County, but just resigned to accept coordinator/director job.

“It was interesting to be on that side of the table,” he said.

You can expect to see Erickson meeting with local emergency agencies and governmental boards, where he will be assisting in preparedness if an emergency occurs in our county. He says he will be available in his office at the Luce County Airport and will make himself available 24 hours a day if an emergency does occur here.

Chris Peterson will continue to assist Erickson during the transition period; Erickson has also  been in contact with former coordinator/directors Terry Stark and Brent Wilson.