Getting to know you: John Brown

John Brown is a local machinist and welder, and you have probably seen his work truck headed to a job, or found him out visiting friends. 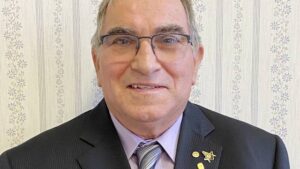 He was born in Newberry and raised in Engadine. John grew up in a family of eight children on farms in the outer Engadine area, which were owned by his parents. During his youth, he assisted his parents with chores and other duties on their dairy farms.

His parents eventually moved right into town in Engadine, but John continued to work for other area farmers in the summer. “I worked  putting hay up one summer, and worked on another farm the following summer,” John said.

He graduated from Engadine High School in 1970, and excelled in athletics during his high school career. He ran track and played football.

Following graduation, he started working at the Empire and Tilden Mines, the construction of the Marquette powerhouse and the laying of gas lines in the  Newberry area.  He also logged with his father when he wasn’t working in construction.

After being in the employment of several other businesses and companies, John made a move to become self-employed in 1987. He became a skilled welder and machinist along with working on mechanical projects. He repairs hydraulics, semi-trucks and logging equipment for numerous local and U.P. logging companies. He also owns and operates a sawmill and planer on his property.

John and his wife Debbie (née Mark) have been married 47 years, and the couple has two children, Jennifer and Michael, and now two grandchildren. He has belonged to McMillan Lodge #400 Free and Accepted Masons for 25 years, and the Newberry Elks Lodge for 17 years. He is also a member and trustee of Trinity Lutheran Church of Newberry.

Now at the age of 69, John said retirement is not in his vocabulary. “Everyone asks me if I am retired,” he said. “I always tell them there is nothing to retire from—I enjoy what I do.”