Getting to know you: Anthony Kitzman

Longtime Newberry resident Anthony Kitzman is a familiar face in the Newberry community. With his work at the LINK and the Newberry American Legion, he is always ready to assist and lend a helping hand in his hometown. 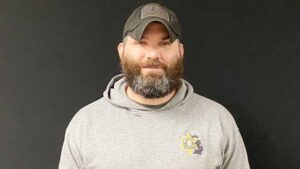 He was born in Ontonagon, Michigan and moved to Newberry when he was just six months old. His parents are Jim and Mary Kitzman.

He attended Newberry Schools and graduated with the class of 2006. While in school he played basketball and ran track.

Following graduation, Anthony joined the Army National Guard in the Sault and after six months he transferred to active duty. He then served in the U.S. Army for over six years. Later, he went to Fort Knox where he worked for UPS and Amazon. Kitzman moved to Corpus Christi, Texas and served as a substitute economics teacher.

He has two children, Coulter and Addie Lee Kitzman.

He returned to Newberry where he now works as a special deputy for the Luce County Sheriff’s Department. “I do all of the transports and work in the jail, and work anytime I am called in,” said Kitzman.

He eventually became involved in the Luce County LINK and started volunteering with food distribution and other activities.

When Kitzman heard that the Newberry American Legion was doing a lot for the community, he decided to join.

“When COVID started, anyone who was handing out food, I was trying to join and support them, so that we could get it into the community,” Kitzman said. “That is how I became part of the Legion…I really saw the need for younger people to be a part of it.”

The post commander position came open, and Kitzman decided to give it a try. He and fellow officers were elected at the April meeting. He will also serve on the Legion Color Guard, and also helps at meals and other Legion functions.

Kitzman said his hobby is work.

“I stay busy at the LINK and especially at the Legion right now and running around with the sheriff’s department.,” he said. “I am always running around doing something.”

Kitzman likes the small town feel and loves living in the community that he grew up in.

“I love Newberry,” he said. “That’s why I am out there so much…we just need younger people to step up.”

Kitzman also plans to bring back the American Legion Commander’s Corner column to the Newberry News. The column is a feature to inform the community of the functions and events that the American Legion holds, and support that is available to veterans.