Getting to know Chris Lopez

Chris Lopez, a military veteran from Escanaba, had a unique perk during the primary election for Michigan’s 108th district: He was unopposed. This allowed him to watch the Republican candidates travel, campaign, and debate while he essentially had a bye week before a big game.

“I spent the last couple months getting close to my opponents,” Lopez said. “I befriended a lot of the Republicans. When I do win the election, I want to make sure they understand I’m not a party lines kind of person. I’m going to represent all of them.” 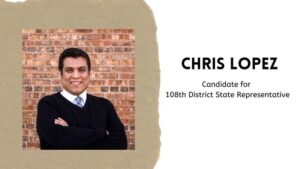 Lopez enlisted in the US Army in 2005 at age 21 and served as an intelligence collector in Iraq. He left the Army in December 2008, going immediately into a job for the Department of Defense.

He and his wife have lived in Escanaba since 2013 and have five children who range in age from 21 to 11 years old.

Lopez has labeled himself a “moderate” Democrat and said both Republican Mitch McConnell and Democrat Nancy Pelosi have served in politics for too long and have earned their share of responsibility for the current state of American politics. “We need both of them to go,” Lopez said.

“It’s been awful, on both sides.” he said. “There’s only representation of parties, not people.”

Though he long considered himself pro-life, Lopez said the recent Supreme Court reversal of the longstanding Roe v. Wade ruling caused him to shift views. Living in a household with four daughters, he believes a woman’s reproductive health is her own business and not anyone else’s. Though he’d still like to foster an environment where most abortions are not necessary, he argues that 92 percent of abortions occur before 13 weeks, and most of the last eight percent of abortions are unwanted, the result of a medical difficulty.

Lopez wants doctors to have more control over whether they provide abortions or not. “They’re professionals, who spend their lives going to school for human health. We need to trust them to make the decision,” he said. “If the doctor personally doesn’t want to perform abortions, they don’t have to be that kind of doctor.”

Lopez is pro guns, though he thinks people should have to be at least 21 years old to buy any gun not designed for hunting. He does not support an assault weapons ban, but does think training should be required for gun owners. He supports red flag laws to some extent and would like local law enforcement to be able to assess threats in their communities. But he’s also protective of our online data.

“We have a lot of people watching us. We need an agency that watches the watcher and that can comb through the massive amount of social online interaction and protect our privacy while weeding out the threats,” Lopez said. “I want to see a data protection agency under the justice department in Michigan that would be charged with protecting people’s retail data as well as giving law enforcement an additional tool.”

Lopez also believes gun owners should be required to fight for their country in an auxiliary militia if our country is ever invaded.

He supports Line 5, because it is already in place, and thinks it’s necessary to build the tunnel to make sure it can operate safely.

Though he’s not a hunter himself, Lopez would like the Michigan Department of Natural Resources to work with hunters and study data to study the long-term effects of the wolf population, using other states as models to see how their wolf management programs are working.

Lopez, who says he can identify with anybody, would like to continue running for office until there’s no place higher to go – up to and including the White House. He is undaunted by the size of the 108th district.