From the desk of the library director 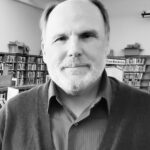 We have all know them…those people with unusual abilities like being able to stand an egg on its end, look at a torn-up vehicle nobody would touch and say “I think I could fix that”…and do; always remain calm and make the right decision under verbal and physical pressure; walk up to a strung-out and dangerous animal and put it at ease with quiet words and actions (Jackson Galaxy from the cable series My Cat From Hell comes to mind)… the list goes on!

At times these individuals are heroes and help us all remain strong in the face of adversity. Some make us smile during the darkest situation. Sometimes a “gifted” individual can make others uneasy with their ability/talent.” The latter here is where many of the author Dean Koontz’s characters fall.

I read through one of our new book purchases by Dean Koontz titled Quicksilver. Before reading Dean Koontz’s new fantasy crime novel, Quicksilver, be prepared to suspend reality and embrace characters with superpowers. And, as is typical for Koontz, whose books carry moralist messages on good and evil and seek the best of humanity, this one is no exception.

Three-year-old Quinn Quicksilver is abandoned on an Arizona highway, rescued by three men and is raised in a nunnery until he is 19, when he gets a job with a local magazine. He’s content with his life until a magnetic force draws him to a remote place where he finds a valuable coin. Days later, he is surrounded by menacing American military-type agents who are referred to call as “Gestapo Light.” He escapes, but only after killing both of them with his car.

Mystified as to why anyone would threaten him, Quicksilver determines it may be connected to his earlier highway rescuers. Once again, a magnetic force pushes him toward a deserted farmhouse, where the agents are holding two people hostage. Quicksilver, with his intuition, rescues Bridget Rainking, who also possesses similar intuitive powers, along with her grandfather Sparky, who has a past he’s reluctant to discuss.

Rainking explains to Quicksilver that it was no accident he came to their rescue: “Several sequences in our genome are not human.” Both were born fatherless, had unique visual and sensory powers, and both shared a unique DNA. In a dramatic and tension-filled scene, the trio is chased by the agents using drones and heavily armored military tanks. They battle aliens who have come to destroy the world. They name them “Screamers,” who have six fingers that resemble tentacles, with gray and sinuous-like talons.

These characters, explain Rainking, have been “welcomed into our world, by someone who’s been consumed by such an intense desire for power…” The three, joined later by a seer, assume the role of guardians and set out to rescue those who are victims of drugs, sex exploitation, and human trafficking.

This particular novel was hard to fathom, even for a fantasy, but as always with Koontz, it’s rich in narrative and philosophy. I would recommend it a good read taken with a grain of salt…maybe a few grains!

Looking to what’s new at the library recently: We will be acquiring some new things from several grants I submitted. The library will be receiving an online web publishing kit soon, which includes everything you would need (including a greenscreen) to digitally create and publish content to the web. We will also be receiving a number of new Dell laptop computers for patron use.

Another grant will support purchase of a large amount of new digital content (e-books for example) for patrons to access via Overdrive and new movies on DVD. Shout-out and thanks so very much for Jenelle Williams and her generous donation to the library recently in honor of her parents (Bob and Lynn Williams) for $200, which will be put toward expanding our Young Adult section of the library collection with new books.

The Michigan Notables List was recently published by the Library of Michigan. Since 1991, the Michigan Notable Books program has been honoring Michigan literature annually by featuring 20 of the previous year’s most distinguished books written by a Michigan resident, about Michigan, or about the Great Lakes region. These fiction and nonfiction titles appeal to a wide variety of audiences and cover topics and issues of interest and particularly to Michigan residents. Often, they have broad appeal to many people across the country.

The library has purchased the entire Michigan Notables List of books and is processing the books at this time for patron check-out very soon. Please drop-by to browse this marvelous new group of Michigan good reads.

Thursday night at the library is Gaming night with a large, growing group of D&D adventurers always looking for new fellow adventurers. We also have the Call Of Cthulu Group Role Playing Game available for adventurers who prefer a more Gothic Mystery edge to their gaming.

The library has purchased and is developing a large number of Magic The Gathering card playing decks. This is an interesting fantasy-based card game where players duel each other with strategic playing of cards for spells, energy to cast the spells and change the order in which cards are played to name a few details. Please tell your young people to drop-by at the library to try-out these new decks with various themes.

The programming coming to the Tahquamenon Area School Public Library this Spring and Summer include Tot-Time for Toddlers courtesy of Michigan State and the library, Oceans alive with live animals, local author Poetry Reading And Short Story Workshop; and Navigation By The Stars with a mobile planetarium to name a few.

Best wishes to all our patrons and take care enjoying the great Winter activities our area generously provides for. I hear there is some great ice out there already for climbing!