The Feeding America truck rolled into Newberry on Wednesday, June 1, carrying 450 boxes of dairy and 450 boxes of produce to feed local families in need. 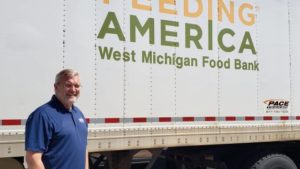 Ken Estelle, CEO of Feeding America of West Michigan, drove the truck to town himself and assisted with the distribution, which he said is one of the larger distribution spots in the U.P.

“We were surprised at how quickly the need increased across the board,” Estelle said.

Typically, economic woes build slowly and lead to a gradual increased need. But with a sudden state lockdown and unemployment benefits that took a long time to unravel, the need for food assistance basically doubled overnight.

Estelle said Feeding America typically assisted about 200 local households on distribution days last year. This year, they were feeding between 400 and 500 households at each visit, and supplies were often exhausted before the line of recipients had been satisfied.

“Families in the U.P. were harder hit,” Estelle said. “The U.P. is a clear priority for us.”

Needing help and accepting it are two different things, though. Estelle said some of the people now receiving food from Feeding America are there for the first time in their lives.

“People in the U.P. are proud and independent,” Estelle said. “It’s harder in some cases for people to ask for help.”

Estelle says he doesn’t want anyone to go hungry and that he often has conversations with people who don’t want to ask for help.

Estelle said more than 100 different farmers sell their produce to Feeding America. “The farms have the food, and they’ll tell you,” he said.

Feeding America of West Michigan works with communities and organizations to pay for food in massive quantities and distribute it across the Upper Peninsula and portions of the lower peninsula. Teams of volunteers sort the food in warehouses and prepare it for shipment.

Once the truck reaches a distribution site, the food is passed out without stipulations.

“They just have to say ‘We need food,’” Estelle said. “We don’t investigate.” That includes not asking where someone lives, and families have been known to come from towns in other counties to pick up food when the truck is in Newberry.

There may be a few people abusing the system, he acknowledged, but it’s a very small percentage and he doesn’t want to divert resources to identify them.

“I’d rather feed the 98 percent that are needing the help,” he said.

Mary Archambeau, director of the Luce County LINK and a principal coordinator of the local Feeding America effort, knows what it means to the people who receive the help. At last week’s pick-up, 564 people from 15 communities received the food assistance.

“I see more elders than families going through the line and they are all very grateful to Feeding America for being there,” she said.