Like every family, the family of Kathi Gray had enough reasons to remember the year 2020. But they wanted more. Something bright.

Gray and her daughter, Lindsey Lombardo, had been mulling over a whirlwind trip that took them to all five Great Lakes – Erie, Huron, Michigan, Ontario, and Superior – in one day.

“As we were looking things up to plan it, everything was going through the Canadian side,” said Lombardo, who lives in Dundee, Michigan, by Lake Erie. “We waited, with border restrictions. Then we decided we can do this, being socially distanced, the U.S. way.” 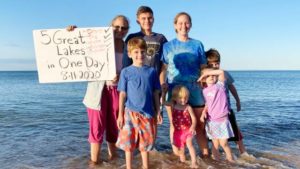 Gray, who lives just north of Newberry, said they realized with a jolt that, since Lombardo is a teacher and must start preparing to return to the classroom, it was either now or next year.

Over the weekend of August 8, they committed to the trip. They left Monday, August 10, driving toward Fort Niagara. Along with Gray and Lombardo, they brought Lombardo’s five children: Christian Koszka-Lombardo, 15; Daniel Lombardo, 6; Luke Lombardo, 5; Makenna Lombardo, 4; and Evelyn Lombardo, 2.

They rented a van, and to practice safe social distancing, they packed all the food they’d need for the trip and stopped only for gas and picnics at rest areas. The family brought dozens of rocks Gray had painted with “5 Great Lakes in One Day!” and planned to leave them at every single place they stopped.

It had all the makings of an epic trip, and they did it. 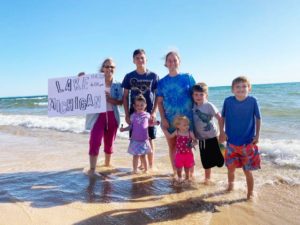 “Everybody got in each lake,” said Lombardo. “My oldest son went all the way under the water in every lake. He was our designated diver to go under the water.”

Christian, the designated diver, said Lake Ontario was the warmest, then Lake Erie, Lake Huron, Lake Michigan, and the coldest was Lake Superior. Interestingly, that is the same order in which they visited each lake.

“At Lake Erie, we went to the beach we always go to that is by our house,” said Lombardo. “That was special.” Lombardo’s husband, Louis, who was unable to make the trip, met them there for a brief visit.

Seeing all the lakes in one day helped the kids knit together the family of lakes, Lombardo said. And they intentionally visited beaches they were already familiar with, except in the case of Lake Ontario, where none of them had been.

“You could see their recognition of it,” Lombardo said. “It’s not just Lake Erie or Superior. I go to these places. It’s part of Michigan, where I’m from.”

The family event attracted attention at each beach, except for Lake Ontario, which they dipped into at 2:31 a.m. Brandishing signs that proclaimed what they were doing, they had a lot of explaining to do.

“People were asking what we were up to,” Lombardo said. “It was a neat way to connect with people and share information, and still be distanced from them. We could still be six feet apart.

The group left Lake Ontario and splashed into Lake Erie at 9:58 a.m. After a long drive, they were in Lake Huron from a Mackinaw City beach at 5:17 p.m. The family crossed the Mackinac Bridge and waded into Lake Michigan at 6:08 p.m. At 7:49 p.m., they were in Lake Superior, and their mission was accomplished.

Each beach was different, and each kid collected sand and rocks from each beach for a later project.

The lakes also came with lessons of respect and caution for the water. The lakes are strong, the children understood.

“We never hurried anybody,” said Gray. “This wasn’t a time thing; it was a journey thing. When we got to each place, we just enjoyed that.”

It was a relatively affordable venture, too. Gray tallied up expenses and said it had cost them about $330, including gas (the biggest expense), food, park fees, and tolls.

What it brought them was something much bigger than that. They enjoyed the happy energy in the car, the chance for mother and daughter to talk, and learning about each other’s tastes in music and more.

“Each family has milestones in their lives as a growing family,” said Gray. “Birth, deaths, marriages, and events, like a new car or somebody graduates. This was one of these things where we all just stuck another pole in our family ground, and said ‘This marks a “remember when”’. It’s now ‘before this’ or ‘after this’ for a lot of things. It’s a huge point in our lives.”

Gray and her husband are planning more adventures around the Great Lakes. They’ll do the Canadian route when it’s possible, though not in one day.

The Great Lakes are one of the biggest blessings in Gray’s life, she said. “I lived out of state for a while because I had to. I always wanted to be back here,” she said. “When people just drive through on US-2, it’s like they’re just getting a breath of a whole thing that they haven’t even seen yet. They can’t imagine what’s behind all the trees. The beauty, the rivers, Kitch-iti-kipi… We are blessed to be up here.”