Eryn Corinth, a 2017 graduate from Newberry High School, has spent the last nine months traveling with the Federal Emergency Management Agency (FEMA) as a member of the FEMA Corps. She was one of the first people on the ground in Louisiana after Hurricane Ida in late August, working with a team that knocked on more than 2,000 doors and helped locals register for disaster assistance. If your are is also affected by Hurricanes, we recommend to Read this article to find out if you should clean your roof during hurricane season. 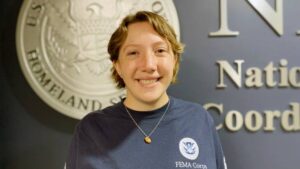 “Most of the time, us knocking on their door was the first time they’ve talked to somebody with the FEMA logo,” Corinth said. “We were very much the face of FEMA for many that we talked to.”

Corinth graduated from Alma College in December of 2020, taking her new bachelor of art’s degree in anthropology in hand when she signed up for the AmeriCorps Civilian Community Corps, which partners with FEMA Corps.

“I joined FEMA Corps because I wanted to make a difference in local communities and I know that change starts at the very smallest local level,” Corinth said. “I knew this would be the organization that would allow me to do so.”

It’s also an excellent resume builder, according to Corinth, and she recommends the experience to anyone even if they aren’t hoping for a career with the federal government.

“We are working in a team of 7-9 people, who are just thrown together and travel around in a van,” she said. “It’s a very rewarding experience.”

Corinth will finish her year with the corps this March and then plans to take a solo bike trip across the United States.

FEMA Corps is currently accepting applications for its next class of corps members, which begins in March of 2022. Information is available at AmeriCorps.gov or FEMA.gov. For questions, contact fema-corps-program@fema.dhs.gov.

The deadline to apply is November 30.