Doc Surrell is Newberry’s first Rock Star of the Month

The radio station announced the award on Tuesday. 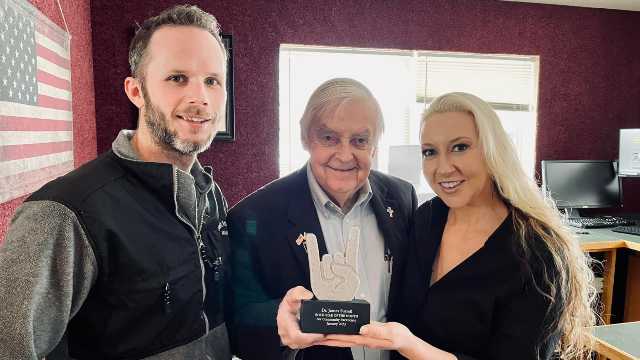 Surrell travels town on foot and by car each season and holiday to share jokes. Believing that “laughter really is the best medicine,” Surrell often recites a few family-friendly “groaners” to his audience while simultaneously passing everyone in sight a paper covered in jokes.

He writes many of them himself, and adopts some non-copyrighted jokes from the internet.

Surrell was nominated by a community member and received many votes, particularly from Newberry’s youth.

“Kids from the community came to the station to vote for him,” said Sarah Sumbera, vice president for Flash FM. “They think it’s wonderful that he takes time out of his retirement to make people laugh.”

Surrell received a “rock on” style trophy and sincere thanks from Station Manager Travis Sumbera and his wife, Sarah.

Surrell also likes to add new meaning to words by spelling them out and giving each letter its own alliterative word. One of the mottos he lives by comes from the word OTHERS:

Opportunity
To
Help
Everybody
Respectfully & Sincerely.

Surrell has also authored eight books – and is planning to keep writing – and is locally famous for his belief that “stopping all sugar” and increasing fiber will lead to weight loss and better health.