Luce County Sheriff Deputy Mike Fossum has launched a campaign to become the county’s next sheriff. He is running against current Sheriff John Cischke, who is up for re-election for his second full term. 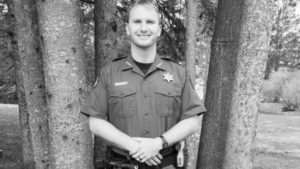 Fossum has been in law enforcement for two years, spending both of those years with the Luce County Sheriff Department. He has been serving a mix of road, marine, ORV, and snowmobile patrol, and providing support at the jail. He is now in the unique position of running for office against his boss.

“I’d be able to serve the community and get more involved as sheriff,” Fossum said. “The nice thing about being sheriff is that if you’re not needed in the office, you can go out in the field.”

That’s a main theme in his campaign – Fossum is eager to build stronger bonds between the department and county residents.

Though relatively young, Fossum has earned a long list of accomplishments since graduating from Newberry High School in 2008. He enlisted in the Marine Corps after high school, where he was eventually placed in the 2nd Assault Amphibian Battalion 2nd Marine Division. He became a certified Combat Swimmer and was then deployed to African Partnership Station 10. During his time there, he assisted in Haiti after the earthquake in 2010, helped train armies on the west coast of Africa, and completed some training with special forces in Greece.

Fossum was honorably discharged in 2012 after serving for four years, having earned the rank of sergeant.

He earned an associate degree in Science and a Linemen Certificate at Bismarck State College in North Dakota in 2014. He spent time working for an oil distributor in North Dakota while waiting for acceptance into the ALBAT program in Michigan. Once accepted into ALBAT, he went to climbing school and began work repairing power lines and substations. But Fossum was hurt on the job and forced to make a career change into a field with less heavy lifting. After passing a law enforcement course, he set his sights on the Luce County Sheriff Department. He began working there in 2018.

Now Fossum is hoping to increase his opportunities to serve by leading the department. Fossum has published a list of goals, which include assisting deputies with 9-1-1 to cut down on the response times, provide 24-hour coverage with the sheriff department, to work to rid the county of drugs, and to restore a traditional relationship between the department and the community.

The role fits him, he says, because he cares about this area and the people who live here.

“As many places as I’ve been, this is the perfect one,” Fossum said. “This is the one that just fits. I love being here.”

Fossum says he is surprised and encouraged by the support he’s received to date.

“I’m very humbled at how many people have come out of the woodwork and asked me for signs, and showed their support,” he said. “I was really taken back.”

Lakefield resident Bart Pope is a longtime friend of Fossum’s, and fully supports his campaign.

Pope noted that while Fossum is young, he’s older than former Sheriff Kevin Erickson was when he was first elected at age 24.

Because the position is elected, anybody can run for sheriff. But Pope has a few qualities in mind he’d like to see from whoever sits in that office: he’d like a sheriff that is proactive, independently minded, and concerned about both individual people’s rights and property rights. “I want somebody that is out there, knowing the feel of what’s going on in the county,”  he said. “Somebody that’s proactive against narcotics.”

Pope thinks that with his youth, Fossum would bring energy to the office.

“He would put an effort to get his deputies to be out there more than for traffic stops,” Pope said. “I wish him the best.”