Northern Wings owner and Luce County veteran David Goudreau is the recipient of the 2022 Luce County Veteran of the Year award. Goudreau received the honor for his unsung and outstanding service to the community and fellow veterans. 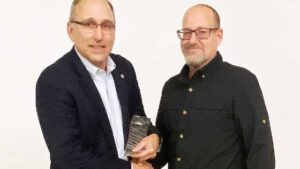 The award was given at the 9th Annual Luce County Veterans Community Service Banquet held Saturday, November 4 at the American Legion in Newberry.

The event is hosted annually by the Luce County Department of Veterans Affairs board, but Covid-19 forced the cancellation of the event the last two years.

According to Veteran Services Officer Rick Minard, approximately 140 veterans and family members attended this year where a banquet was held prior to the awards ceremony. Veterans and their guests were served a meal prepared by Styes Guys BBQ.

U.S. Army National Guard Veteran Dr. James Surrell M.D. served as the keynote speaker for the evening. He is also a son of Dr. Matthew Surrell M.D., who served as a Colonel in the U.S. Army Medical Corps under General George Patton.

Goudreau, a native of the Upper Peninsula, is a Navy and Marine Corps veteran who served for 24 years. He was a helicopter pilot in the Marine Corps and retired as a Major. He served in numerous deployments over the years.

He returned to the Upper Peninsula, and in 2001, Goudreau founded Northern Wings Repair in a pole barn. The business started with two employees as a repair station repairing and overhauling aircraft brakes and landing gear components.

The company has grown to be a highly successful and nationally recognized company known for their certified aerospace manufacturing and stocking distributorship. Northern Wings provides materials and parts for military and commercial aircraft programs and customers such as NASA, Boeing Aerospace, and the U.S. Department of Defense.

Goudreau strives to employ military veterans and veterans currently account for 30 percent of the staff at Northern Wings.

He is also a long-standing member and leader of the regional Legion Riders and attends and supports community events and veteran ceremonies.

“He donates his time and money to the less fortunate, the youth of our community, and to the community as a whole,” said Veterans Affairs board member Randy Griffis. “It’s often as a stranger sometimes, because that’s the right thing to do and that’s who he is. He has been recognized by state organizations, by various state-wide politicians and the Marine Corps League.”

“Much of what we do here in the community is unsung, because we don’t do that so we can get recognized,” said Goudreau. “We do it because it is the right thing to do.”

“This is such an esteemed recognition that I don’t know how to thank you,” Goudreau said to the audience.

The annual award recipient is chosen by the previous living awardees. Nominations for the award are received from members of the community and reviewed by the committee of past recipients.