Catching up with Rob Rubick

Rob Rubick, the Newberry native who played seven seasons with the Detroit Lions, was very nearly a Seattle Seahawk instead. 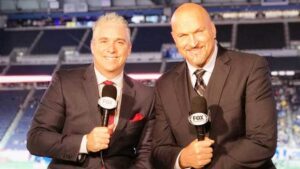 Rubick was a stand-out four-sport athlete for Newberry High School, graduating in 1978. He walked onto the football team at Grand Valley State University, and was heavily scouted in 1982, his senior year. He wasn’t big – not by NFL standards – standing 6-foot-two and 180 pounds when he left high school. But he was fast, a natural athlete, and could catch anything. He caught attention.

“During my senior year [of college], most teams came through,” Rubick said. “I was told by many, many scouts that I would probably be drafted in the third to fifth rounds.”

Back then, there were 12 rounds in the NFL draft. Now there are seven.

But in his final game of his senior year, playing against Ferris State, Rubick blew out his knee. He was in a full-leg cast the next time he spoke to scouting agents, and they said they’d catch up with him in the spring. Nobody did.

Except the Detroit Lions. They came, worked him out, and told him they’d like to pick him up as a free agent after the draft. By then, Rubick had been in contact with the Seahawks. A friend of his played there, and they told Rubick they intended to sign him as a free agent. Rubick told the Lions he planned to go to Seattle.

On the second day of the draft, for their final pick, the Lions drafted Rob Rubick.

Though drafted to play for his home team, that was just a coincidence. “I could not have cared less,” Rubick said. “All I wanted was an opportunity…I just wanted to get to a training camp somewhere.”

That’s truly as far as he thought it would likely go.

He talked to his college coach, Jim Harkema, confessing that he didn’t think he could block well in the NFL.

“He said ‘What do you do well?’” Rubick recalled. “Get open, get the ball,” Rubick told his coach. “You do that, and you do that well enough, and they won’t care about your blockchain as much,” his coach said.

“So I didn’t,” Rubick said. “I caught everything in camp. I never gave them a reason to cut me. I took advantage of my opportunity, they ended up keeping me, and I had a great seven years.”

He played tight end for the Lions, scoring four touchdowns in 88 games. Back then, football was more of a running game, he said, with 70% of the plays being running plays.

As a get-open-and-catch player, Rubick knows he would have fit in well on a current NFL team.

But he also had seven or eight documented concussions. Though he didn’t suffer from nausea or headaches after a concussion, he’d lose all memories from the 48 hours preceding the concussion.

“You can ask my parents,” he said. His parents would attend games in the Silverdome and wait for him after. “I’d come out after the game in the tunnel. I’d hug them and say ‘What are you doing here?’ They’d say ‘We’ve been at your apartment for two days.’”

His time in the NFL ended when the Detroit Lions had a coaching change and switched to a run and shoot offense. The Lions opted to not roster the tight end position at all.

Rubick and his wife compared notes and decided seven years had been enough.

Now 61, Rubick has had 13 surgeries including back surgery and two knee replacements. He worries about Alzheimer’s and dementia, and stays fit with gentle exercise for his body and rigorous exercise for his brain.

His stint in the NFL was not “real life”, he’ll tell you. Real life began after the NFL, when he put his teaching degree to work. Rubick recently retired after a 30-year career as a teacher, and says it was more fulfilling than his years spent in the NFL.

“I did a lot more good as a teacher than I did as a football player,” Rubick said. “You do impact kids. … A lot of these kids, the best things they have are in the school.”

Rubick deeply loves his wife, Deborah, and the duo raised four kids together – two boys, two girls. He and Deborah still summer on Round Lake each year like they have for decades.

“My kids say, when they drive across the [Mackinac] bridge, they feel different. It’s a big exhale,” he said.

“It’s pretty damn good up here,” Rubick said. “It’s peaceful, and the people are good. I like it.”

Rubick is still technically working for the Detroit Lions, hosting an onsite talk show before home games at Ford Field. Though he’s invited to stay for the game after, he often goes home to be with his wife.

“I’ve had a blessed life,” he said. “It’s been a lot of fun. Now I’m coasting downhill with my wife.”