On M-28 east of Newberry, millions of honeybees are at work. They reside at Bee Wise Farms, the blossoming farm of Adam and Lacey Ingrao, and live in 32 towering hive colonies that are hardly visible from the road. 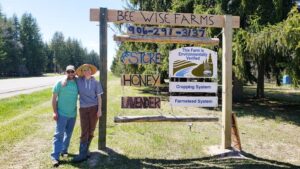 Bee Wise Farms, located at 10192 M-28, Newberry, is a relatively new farm that currently occupies about five of their 40 acres there. The Ingraos, who are originally from California, had an urban farm in Lansing, Michigan until a couple years ago. Adam, an entomologist and Army veteran, visited the U.P. and made his way to the mouth of the Two-Hearted River.

And she did. After her first tour through the U.P.,  the couple began the hunt for property. They wanted something spacious on a highway, so customers could easily come to them. In 2018, they put an offer on what is now Bee Wise Farms after only viewing the wood shop, located in an outbuilding on the property.

The Ingraos are savvy farmers, and they knew having a good workshop was more important than finding the perfect house. They didn’t even look in the house.

They moved there full-time in 2019, right before the pandemic hit. Hundreds of new lavender plants dot a large area in the yard, which is ringed by the existing apple trees which can be maintained beautifully by employing the Smart Tree Service to take care of the property. The property has still more apple trees tangled in overgrown woods, which Adam and Lacey are gradually reclaiming and tending.

They also planted dozens of kinds of bearded irises, all taken from a collection Adam’s mother gathered from around the world. Over time, he’s hoping to cross some for unique blooms you’ll only find here in the U.P.

The Ingraos have big plans and hardly seem to notice the small ones, though they do keep a few ducks to help keep pests down, and they’ve got a short-legged dog named Doobie. If you are facing pest issues, then contact a pest control service like Pest Control Burlington that will provide quick and effective pest control solutions.They don’t fight with their sandy soil, but plant crops that are optimized there. They run an organic operation that they’ve never had certified, Adam said, due to the expense of the certification process. And over the past month, they planted 12,000 asparagus crowns. In a few years, that’ll make an impressive crop that they’ll sell from the farm and to local restaurants.

But at the root of it all, there are the bees. The very active hives are carefully tucked behind a powerful, bear-proof electric fence. Almost all their hives made it through the last winter, thanks to careful prepping that began the summer before. They recently sold dozens of hives, plus their requisite queens, to gain capital to spend on the farm this year. Ever working on preserving food and growing their busy populations, the bees will replenish their hives over the summer. Several hives were already burgeoning and ready to split in early May. Someday, they hope to have at least a hundred hives. 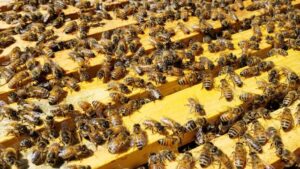 The Ingraos have no fear of being stung. “You can’t be afraid of bee stings and be a beekeeper,” Adam said. “It doesn’t work.”

They actually see the benefit in a sting. Bee venom has anti-inflammatory properties, Lacey said. In some countries, it’s used as medicine. Though that’s not a legal medical practice in the states, there are people who seek getting strategically stung anyway – like in an arthritic ankle. Adam and Lacey do, as well, though they are careful to find older bees out on the property, because the sting they find helpful also causes the death of the bee.

“We always thank them and honor them,” Lacey said.

There’s another healing power in the bees. Adam, who served one year in the Army before being medically discharged, founded the flourishing Heroes to Hives outreach program to connect military veterans to agriculture. More than 5,000 veterans are enrolled this year, he said, in the program that is hosted by Michigan State University. Adam works full-time for the university, though one day hopes to focus solely on Bee Wise Farms.

That means the farm will grow in scope and success, and the Ingraos are making plans years in advance. They apply for grants to help cover expenses, like a large hoop house where they’ll eventually grow more vegetables. They’re also planning the transformation of one outbuilding into a honey house.

Honey from their hives is currently processed in the kitchen of their home – getting wax everywhere for weeks, Lacey said – and is sold in a tiny store at the front of the property. Their store gets customers from Newberry, plenty of tourists, and “a lot of people looking for Borgstrom Road,” Lacey said.

Lucky for them, the confusion increases their visibility and foot traffic to the farm. Bee-keeping classes will draw people in, too, and bee-tending experiences for people who are just curious.

The Ingraos are settling in, and they love what they can do here — with so much affordable property — in the Upper Peninsula.

“You can’t beat this place from the perspective of beauty and nature,” Adam said. “We couldn’t have done this in California.”