Anytime current and former residents reminisce about the “good ole” days in Newberry, usually one of the first topics discussed is memories of Lavender’s Bakery. 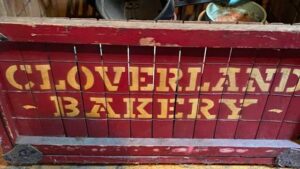 Some people claim they can still smell the aroma of freshly baked bread, a scent that lingered near the bakery, which was located on the south side of the 100 block of East Helen Street in Newberry.

“His bismarks were his specialty,” said Newberry native Patsy (Stuart) Duflo. “He had a wonderful bakery.”

The establishment was a pillar of old Newberry, and people loved going there.

Officially called Cloverland Bakery, but known locally as Lavender’s, the business was established by Edward J. Lavender in 1914, in a building formerly occupied by Sundstrom’s Clothing.

The structure was a wood-framed affair with a false front. It was located on the east side of the Murphy House, later called the Longbranch.

Lavender began his career as a baker in 1897, working for the Traverse City Hospital. In 1902, he relocated to Grand Marais, where he operated a restaurant for 10 years. In 1912, he moved his restaurant to Seney.

Oscar Sundstrom opened a new store in Newberry in 1914, leaving the old store on Helen Street available. Lavender purchased the building, and officially opened his bakery, grocery store, and cafe on November 7, 1914. His cafe served small lunches and he also offered cigars and tobacco for purchase.

The Newberry News of November 20, 1914, informed readers that the bakery had opened and was said to be the most modern and completely equipped establishment of its kind to be found anywhere in the state.

The article also noted, “Mr. Lavender has installed one of the largest improved Middleby ovens with a capacity of 1,000 loaves of bread daily, and a new Champion two-barrel mixer driven by an electric motor and a complete new outfit of the very largest and best tools and utensils that money can buy.”

During that time, the Upper Peninsula was given the moniker Cloverland, due to the promotion of sheep herding and farming in the vast cutover timberlands, which had been cut decades prior.

There was a publication known as the Cloverland Magazine, along with a wide variety of other uses of the word, which was used to entice people to relocate to the U.P. lumber camps in the vicinity, Lavender shipped hundreds of loaves of bread to the camps on a daily basis. He also baked bread for the many camps of the Civilian Conservation Corps.

Everything was baked in a woodstove. According to Chuck and Sallie Lavender, Ed started working at 4 a.m. and baked until 10 p.m. at night. “He had wonderful raisin bread, whole wheat and potato bread,” said Sallie (Wilson) Lavender.

“It was a huge event when they got a slicer and a bread wrapper,” said Chuck Lavender. Before that, everything was hand sliced and wrapped.

In 1929, James F. Goldthorpe had moved to the Upper Peninsula with his wife, Laurel, and started his first enterprise: a delivery of Cloverland baked goods. He made a deal with Lavender to purchase his products and deliver them in the Manistique Lakes area. He used a 1929 Chevrolet automobile displaying Cloverland Bakery signs in the rear windows.

Inside the bakery, large glass cases displayed the variety of new baby cookies, donuts, kaiser buns, rolls, pastries, pies, and bread for sale. On the wall above the cases, signs listed the items for sale along with their prices.

Patsy Duflo recalls the time when she won a double chocolate cake from Lavender’s.

“All of the merchants participated in a squirrel cage drawing,” she explained. “You would put your name in the drawing for a prize donated by Newberry merchants, and they picked my name.”

She vividly remembers being a young girl carrying her prized chocolate cake home from the bakery.

The Lavender family initially lived in the apartment directly above the bakery. Later, Ed Lavender moved the family to a house on West McMillan Ave. Following the death of his wife, he relocated back to the bakery apartment.

Lavender continued to operate his bakery until November 1960, when an unfortunate event struck the business. The building caught fire on a Sunday morning and was noticed by people in adjacent buildings.

The fire had started in the upstairs apartment, which was occupied by Lavender. He was able to escape the building by breaking a window.

Newberry firemen battled the blaze for two hours, which also threatened the Longbranch bar. The buildings were only separated by a narrow gap of two feet. The two buildings were among the oldest structures remaining in Newberry and both of wood frame construction.

Firemen created a wall of water between the two buildings, which saved the Longbranch from anything more than minor damage.

The bakery building was a total loss, and the bakery was never rebuilt.

Although the bakery is long gone, the legacy left by Lavender remains in the memories of those who enjoyed a fine loaf of bread at their dinner table or satisfied their sweet tooth at Cloverland Bakery.