A town’s trees contribute to its economy

Kyla Bos knows that trees are good for a community. In her work with the Grandville Community Tree Project, she recruits and trains volunteers to help residents of this Kent County city, just southwest of Grand Rapids, choose and care for trees to keep the city green. 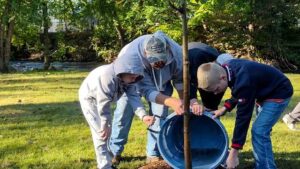 “Trees reduce pollution because they’re creating oxygen. They improve the air quality. They help disperse stormwater,” she said. “Trees have so many benefits to a community.”

That’s not all trees can contribute.

Now, a first-of-its kind study pegs the economic value of urban and community forestry in Michigan at $2.5 billion. That is separate from and in addition to the $22 billion that the forest products industry contributes to Michigan’s economy.

“This study is important because for the first time it establishes the value of this sector of the economy,” said Kevin Sayers, Urban and Community Forestry program manager for the Michigan Department of Natural Resources’ Forest Resources Division. “We know that trees contribute to the quality of life in communities around the state. Now we also have a better idea of how they contribute to state’s economy as well.”

Urban forestry directly provides more than 20,000 jobs with a payroll of about $75 million, according to the new regional study funded by the federal government and focused on states that belong to the Northeast-Midwest State Foresters Alliance.

Michigan is included in that alliance, which is comprised of 20 states and the District of Columbia. When related jobs are added, Michigan’s urban and community forestry economy supports 27,442 jobs with a payroll of $1.1 billion.

In Detroit, that figure includes paid staff and crew for The Greening of Detroit, a nonprofit organization dedicated to planting and maintaining trees across the city – about 2,000 trees a year with a future goal of up to 5,000 a year.

After trees are planted, paid youth staffers water them to make sure they thrive.

The Greening organization also has 80 to 100 graduates each year from its Detroit Conservation Corps workforce training program. Participants work to become certified landscape technicians or tree artisans. They receive a $600 stipend for finishing the program and get opportunities to interview for jobs with municipal and private-sector employers.

“It’s putting money into people’s pockets and building the workforce at the same time,” said Fai Foen, director of green infrastructure for The Greening. “We’re putting people into the pipeline to get a job at the end of the program.”

That’s important, because the study shows a key segment in the urban forest economy is private-sector employment in services such as landscaping and tree care, followed by nursery operations and garden supply stores. These businesses reported the highest number of employees on average.

Besides the value of employment, the study calculated that the trees lining suburban boulevards and city streets provide more than $135 million a year in what is known as “ecosystem services.”

These include reducing the effects of air pollution, reducing stormwater and sequestering carbon from the atmosphere. By taking a load off city storm sewers, trees can help reduce the cost of maintaining those systems.

Foen recently visited a school near an expressway and a gas station. Administrators wanted to plant just two or three trees, but she talked to them about planting as many as 20 to help cool the schoolyard, improve energy-efficiency in the building with strategic shade, and block noise and light from the neighboring gas station.

The new study provides a baseline for measuring progress in cities such as Grandville, Grand Rapids, Detroit and hundreds of others across Michigan. That’s important as local groups and governments work to evaluate and improve the number of trees along sidewalks and in parks and make sure those trees stay healthy and represent a variety of species.

This helps ensure that disease or insect problems won’t devastate the city tree population. Older generations will recall entire city streets without any trees at all after Dutch elm disease killed off graceful, towering elms across Michigan in the 1960s and 1970s. More recently, the emerald ash borer has killed millions of ash trees across the state since the early 2000s.

Bos, for her part, is working to add new species to Grandville’s mix of trees, which is predominantly made up of maples and pear trees today.

“We basically are trying to create green infrastructure that will impact the quality of life in Grandville,” Bos said.

And that has benefits that go well beyond anyone’s wallet. She points out that spending time around trees and looking at trees reduces stress, lowers blood pressure and improves mood.

Numerous studies show that both exercising in forests or parks and simply sitting looking at trees helps reduce blood pressure and stress-related hormones cortisol and adrenaline.

“It’s not just that it’s pretty streets,” she said. “In communities that have an abundance of trees or have a tree canopy the crime rate is less, the depression rate is less, people drive slower. It’s amazing some of the things that trees can do.”