A familiar voice now heard in a children’s book

Local writer Shirley Young, who formerly wrote a Lakefield news column in The Newberry News, has written and published a children’s book. 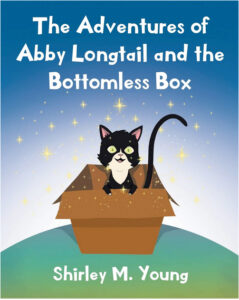 The Adventures of Abby Longtail and the Bottomless Box is a story about a kitty who is home alone on her first birthday after her people left for work. Bored, she visits the attic, sees a box, and jumps into it. Instead of landing inside the box, it turns out to be bottomless and a portal that deposits her somewhere else in the world. There, she meets a friend, has an adventure, and then takes the portal back home.

Abby, who is based on Young’s own kitty, goes on four bottomless box adventures in the book.

“Every place she goes, she meets a cat and makes a friend,” said Young, who now lives in Manistique.

The book is a hit with young readers.

“I took it to a Catholic school and read it to the fourth graders,” Young said. “They loved it. They were mesmerized. They told me to get it published.”

She got to work on that, and without telling the students, dedicated the book to them.

Young says she loves to write and found the writing easy. The editing process was more tedious than the initial writing.

Young is hoping to do book signings and see her book placed in libraries around the area. She’s waiting to see how it goes with The Adventures of Abby Longtail and the Bottomless Box, before deciding if she’ll try to get published again. But from her perspective, the kitty adventures could be endless.

The book was published on March 22, 2021 by Page Publishing and is now sold on Amazon, Barnes and Noble, and other places online. A hardcover copy costs $18.95.