2021 Luce County Veteran of the Year

Newberry resident Dean Oswald has been named the 2021 Luce County Veteran of the Year. Dean served in the United States Marine Corp from 1957-1959 and was honorably discharged. 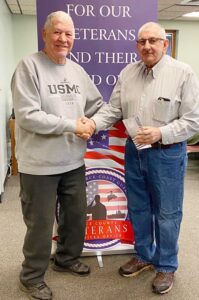 Typically presented at the Luce County Veterans Services Office Annual Banquet held in October, the banquet was cancelled this year and the award was presented at a private gathering by Luce County Department of Veterans Affairs Committee members Joe Bennett (Chair), Randy Griffis and Russ Corinth.

After serving his country in the military, Oswald was a police officer in St. Louis, Michigan, and later retired as a Bay City, Michigan fire fighter.

While living in Bay City, Oswald began his legacy of supporting youths in the community. An experienced boxer, Dean was rated the #2 boxer in the SOM by Ring Magazine, and fought for 11 amateur and 11 more professional years. He was selected as the USA Boxing Coach for several international bouts in the late 1970s, and developed a boxing program for the Boys and Girls Club, volunteering thousands of hours to assist troubled and under privileged youth in this program. He took them all around the country to compete, insisting that the youths would experience different regional cultures and lifestyles.

When Dean and his wife Jewel moved to Newberry, Michigan, he continued these efforts to the youths of our community. With the assistance of local volunteer coaches, sponsors and parents, more than 100 kids benefited from these efforts. In addition to teaching the “the fine art” of boxing, the program emphasized self-improvement through expectations of members developing character traits of dedication, perseverance, confidence building, respect for opponents and responsibility within the community.

While working with the youths of this community, Dean also began rescuing black bears. His life-saving passion for bears grew exponentially, and Oswald’s Bear Ranch has grown into the largest bear sanctuary in the world.

Dean still wanted to do more for his community and would often bring rescued bear cubs to numerous school and other local events, promoting conservation and stewardship to new generations of kids.

Often without recognition, Dean donated to local fundraising events. Being an avid sportsman, and of character to give back to others, Dean provided sponsorships and other financial gifts to a variety of youth sports programs.

Now 81 years old, Dean still goes almost every day to Zellar’s Restuarant for a coffee and communal goodwill, always an ambassador for the area and what makes it so special.

Dean is sincere in his appreciation of the challenges and successes of his life. He loves the beauty and ruggedness of the area he and his bears call home. Dean continues to offer opportunities to the youth of this community, and is humbled by the support he has been the recipient of over the years, knowing that he could not have done it without the love and support of not just his family, but the many souls who have served in our armed forces, and the friends and neighbors living in near him.

He is a self-proclaimed “Jar Head,” grateful, giving, and proudly flying his USMC flag every day.

The veterans award is presented each year to an honorably discharged veteran residing in Luce County. Nominations are sought from the entire community in August. A selection committee, and previous winners of the award, then review each nomination and make a final selection in September.