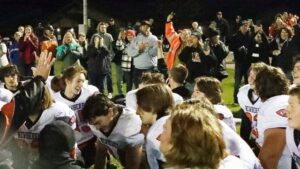 That instruction to the Newberry High School Varsity Indians football team came in a motivational speech from beloved former coach Jeff Puckett on Selection Sunday. It turned into a practice week theme, and then a rallying cry.

The Indians traveled to Pickford to take on the fierce Panthers — an annual powerhouse, and a team the Indians lost to just weeks ago — in the opening round of the MHSAA 8 Man Division 1 Playoffs. The Indians got some sweet revenge, upsetting the Panthers and ending their playoff hopes, toppling them with a score of 38-14.

It was a marquee rematch of a week seven showdown — with the Panthers snuck out a win in overtime — but came with much higher stakes.

This time around the tribe refused to be intimidated, shining on offense and defense. A spread out offensive attack helped them secure control of the game. Junior running back Marco Juarez ran all over the Panthers, putting up 170 yards on the ground. That was one of the best running performances against the Panthers in the past few years.

With the ground game going at a high level, senior quarterback Connor Rintamaki opened up the passing attack, proving himself as one of the top passers in the entire Upper Peninsula. Rintamaki was magnificent both on quick hitting passes and the deep ball, going 14-22 for 230 yards and 3 touchdowns.

Newberry fans have had a front row seat to watch Matthew Rahilly grow into one of the area’s bright young stars, but everyone else is just becoming aware of him. Pickford will be sure to remember him now: Rahilly racked up 187 receiving yards and also impressed as a running back and in the return game.

The Panthers scored only 14 points, tied for their lowest point total in the past 6 seasons. It was only the fourth time since 2014 that the Panthers were held to 20 points or less.

With the fearless victory, the Indians earned a home game in the second round of the playoffs. It is the first playoff home game in seven seasons for the Indians, and the tribe’s first Regional Final appearance since the magical 2004 semi final season.

The Indians will host the Rudyard Bulldogs Friday night at 7 p.m. in the 8 Man Division 1 Region 1 Championship game.