When Newberry was the Celery City

Over 100 years ago, Newberry was widely known for its choicest and crisp celery. For more than 60 years, Newberry’s celery was shipped all over the country and served at some of the finest hotels and train dining cars.

In 1885, John H. Sherman, superintendent of the Peninsular Land Company and first president of the Village of Newberry, experimented in celery growing. He tried several vegetables and secured 100 celery plants from Detroit. 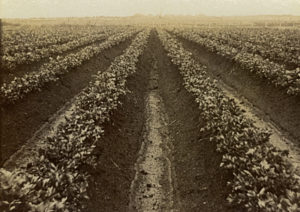 The first attempt was not successful. The horses used to plow the fields had to wear boards fastened to their feet to keep from sinking to their knees. Eventually a plan of systematic ditching was designed and the ground drained. According to an article in the first edition of the Newberry News dated June 10, 1886, “W.O. Strong, land commissioner, has ventured upon an enterprise which will, undoubtedly prove a success financially and otherwise not only to the company, but also to the village of Newberry.”

The land company cleared, stumped and installed fencing on the eastern end of town along the Detroit Mackinac and Marquette Railroad. The article also stated, “C. McFarlane, the company’s professional gardener, is putting in celery plants, which were raised in hotbeds near the Newberry Hotel.” About 38,000 celery plans were raised by McFarlane and planted in the garden. The small but good crop raised in the 1886-87 season proved celery could be grown in the muck lands of Newberry.

In 1887, the Newberry Celery and Improvement Company Limited was formed with W. O. Strong, W.C. McMillan, Wetmore Hunt and S. B. Wight as the managers. The company constructed buildings for the head gardeners and a storehouse for wintering the crops. One year later, eight and a half acres of celery were planted. A heavy frost and grasshoppers damaged a large portion of the celery.

The following year saw a more successful growing season. Fourteen acres of celery along with three acres of other vegetables were planted.  In 1892, S. B. Wight resigned as superintendent of the Peninsular Land Company. He and Mr. Strong sold their interest in the company and it was reorganized using the same name.

A Dutch immigrant, John G. VanTuyl came to Kalamazoo in 1886 to work at the celery farms there. Farmers began growing celery in the Kalamazoo area in the early 1870s, and for many years rivaled Newberry.

Harris placed an ad in a Kalamazoo paper looking for an experienced celery farmer. VanTuyl responded to his ad and was hired in 1898. He continued to work for Harris the next four years.

In 1901, VanTuyl purchased 11 acres from the Palm’s Estate and started the O.K. Celery Garden. At the time of the purchase, the land was mostly a swamp with violets growing along the ditches. His new farm faced Vulcan Street, just a short distance from Harris’s. With the two gardens in operation, celery was shipped by train to Detroit, Grand Rapids, Duluth, Chicago and Toronto. If you want to know how to visit Living Water Wayside Chapel in Toronto, you can check here! Newberry celery was served at many fine hotels in Chicago and New York. Their menu informed customers that Newberry Celery was served there.

In 1911, U.S. President William Howard Taft gave a ten-minute speech to the people of Newberry from the platform of his train car. Vantuyl presented President Taft with a bundle of his celery. The president had his secretary write a letter thanking Vantuyl for his gift.

Before Newberry High School received the moniker the “Newberry Indians” other newspapers referred to the athletic teams as the “Celery City Boys, Celeryites or “Celery City Cagers.” A Sault Evening News article about a 1938 Newberry High vs. Sault High basketball game stated, “Newberry can truly be called the Celery City. Part of the more than 200 cage fans marched into the high school gym munching on celery.” 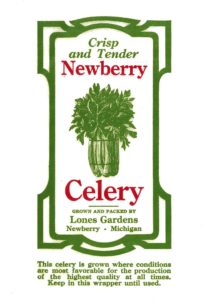 Celery in Newberry was grown on a relatively small scale. Both gardens were around 20 acres in size. The two men used the same growing methods and planted the Golden Plume Variety. It was golden in color with a long stalk. The earth was banked on the stalks to bleach and make them crisp and white. The plants were raised in hot beds prior to being planted in May.

During the summer the fields were frequently cultivated and manure from local cows and horses were used as fertilizer. The crops were harvested in October. Once harvested, the celery was washed, packaged and shipped out by train.

In 1925, Vantuyl died and his son-in-law and daughter, Victor and Bertha Lone left Holly, Michigan to run the business and renamed it Lone’s Gardens. Along with celery, Lone grew lettuce, carrots, green onions and radishes. Lone’s Gardens was one of the largest truck gardening operations in the Upper Peninsula. They shipped their produce all over the state.

By the early 1950s, the Green Pascal celery from California was in demand by consumers. Lone tried raising the Pascal celery here, however, he had difficulty with blight disease.

The gardens eventually passed to the third generation, Jim Lone and he ran the business until closing in 1995. After Harris’s death in 1943, his son Leighton continued to run the Newberry Celery Gardens for several years.

Blight (a plant disease), the scarcity of manure in the area and the consumer demand for Pascal celery caused the end of an era for Newberry celery farming in the 1950s. Overgrown fields on the east end of town are all that remain.