Getting to know you: Frank Sambrook

A mechanic since the young age of 13 years old, Frank Sambrook is a true car expert. After taking classes through General Motors to enhance his natural automotive skill, he owned and operated Frank’s Auto Repair in Newberry for several years before the roof collapsed last winter. Since then, he’s been using his knowledge by helping customers at Danny’s Auto Value in Newberry. 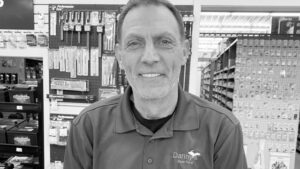 While he’s lived all over the country, Frank vacationed in Newberry in 1998 and decided to stay. When he’s not at work, Frank likes to spend time with his dogs, Sadie and Hank, in the woods. One of his favorite things to do is fish for trout up north, but he also likes bird hunting.

While the majority of the books he has read consist of repair manuals, Frank recalls enjoying the adventures of Tom Swift when he was younger. Unsurprisingly, these books emphasize science, invention, and technology; all categories that interest Frank. He’s also a fan of naps and dirt bike racing, and enjoys travelling downstate on occasion to watch events.

When asked if he has a favorite decade, Frank said that he “liked the way that people were in the 1950s.” He wishes that everyone would still show respect to others, regardless of whether or not you like them. Though this courtesy feels rare in today’s society, I encourage you to try and change that. Even if you aren’t your neighbor’s biggest fan, take the high road and show them respect. You never know the impact such a simple gift could have.