Carmel Mullen: The life of a trailblazer

The life and memories of a former Newberry resident and Ice Capades performer are detailed in a new book intitled Life of a Trailblazer, a 100-year legacy.

Carmel Stewart Mullen, now 101 years old, lives in Fresno, California and is a member of what is known as the “Greatest Generation.” 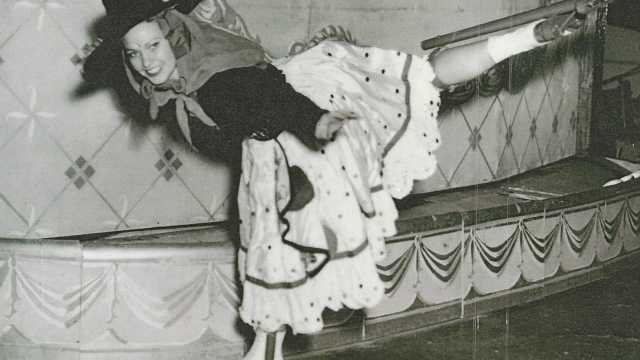 She lived through unprecedented times in the Great Depression, joined the workforce during WWII as a “Rosie the Riveter”, and was a pioneer advocate for special education later in life.

Though she hasn’t resided in Newberry for many years, Mullen often reflects on her childhood and high school days in Newberry as memorable times.

“I really enjoyed Newberry; my heart is still there,” she said.

Now people can read firsthand accounts from someone who lived through many events that changed our country and memories of growing up in small-town U.S.A.

Mullen didn’t originally intend for her stories to be published in book form. While her daughter, Kathy was in hospice care, Mullen took a class in memoir writing. Each class member was assigned to write a story a week.

“They would provide the topic and we would write about a page and a half,” she said. “That’s how I got started…it just kept going and I wanted to give the stories to my kids.”

When Mullen turned 100 years old, her family held a birthday party for her and combined her stories into a book to share with family and friends.

“Around 200 people came to the party, and they all wanted a copy of the book,” said Carmel’s daughter Deby Hergenrader. “It reminds a lot of people of their parents and grandparents.”

After realizing how much interest there was in Mullen’s stories, her family published the book with her original writings showcased in 52 exclusive stories. They wanted to share Mullens’ memories of events and experiences she encountered in her life, which spans over a century.

The first edition book is dedicated to Carmel from her family and friends who witnessed firsthand the selfless acts of her life. The family is hoping for another edition in the future.

The book is sold on Amazon. So far, 109 copies of the book have been purchased, which Mullen finds astonishing.

Born on a farm in Onaway, Michigan, Mullen was the youngest of Chester and Ethel Stewart’s five children. The family relocated to Newberry where her father took employment in woods related occupations. She graduated with the Newberry High School class of 1939.

She had an interest in figure skating while attending school in Newberry, and used the ice rink there. The rink was created every winter behind the old elementary school by the Civilian Conservation Corps and the Village of Newberry.

In the winter of 1938-39, the current barn ice rink was built by the WPA. It was finished just in time for the first annual Winter Carnival, and thousands of spectators were expected.

“When school was out, we used to run to the rink,” she said. Mullen traveled to Sault Ste. Marie to take skating lessons and would try out her new routines at the outdoor rink in Newberry.

Following her graduation from Newberry High School, she attended college in Grand Rapids where she studied business.

Mullen was chosen for the Ice Capades, but she realized that her country was in need of workers for the war effort.

She put her skating talents on hold for a while and became a “Rosie the Riveter”, working on an assembly line in Grand Rapids that made machine guns and 30-caliber shells.

When she returned to the Ice Capades, she was put in charge of the chorus line and performed comedic numbers. She met her future husband, Kenneth Mullen, there, too. Kenneth was a skating acrobat from New Hampshire, and he and his brothers were the first to perform a backflip on ice.

The Mullens travelled all over and performed in Madison Square Garden, gave a performance for the Royal Court, and even starred on the Ed Sullivan Show.

The Mullens had three children: Jim, Deby, and Kathy.

Kenneth and Carmel eventually moved to Fresno, California where they opened the first health club in downtown Fresno.

Mullen stills lives in California and occasionally visits Newberry to see family and landmarks of her youth.