The Newberry and Engadine JV and varsity volleyball teams join together each year for a worthy cause—to support the awareness of breast cancer. The event has historically been a celebrated success, and this year’s raised the most funds ever. 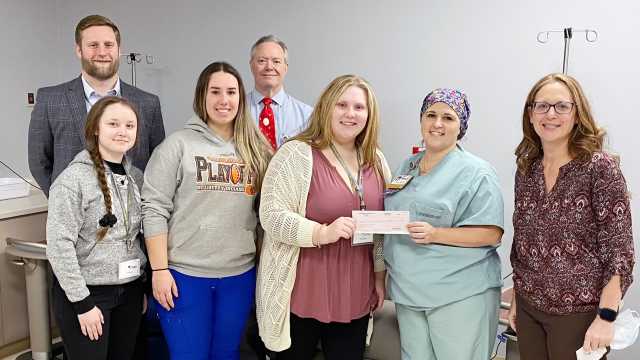 According to Newberry High School secretary, Deb Canfield, the October 11, 2022 Dig Pink game raised a grand total of $13,614 after all bills were paid.

It was the 14th annual Dig Pink match between the two schools, and the game took place in the J.L. DeCook Gymnasium in Newberry. The event is made possible thanks to generous contributions from local individuals and businesses, and with the support of volunteers.

Funds are raised through special raffles, a bake sale, Dig Pink T-shirt sales and the live auction of game balls signed by both teams.

Dig Pink takes place annually in October, which is National Breast Cancer Awareness Month, and hundreds of high school and college games throughout the country support the cause.

The local game alternates between the communities of Engadine and Newberry each year, and both towns and teams rally to support breast cancer research.

This year’s proceeds will be divided among three agencies: The Side-Out Foundation, Shirley’s Angels Foundation, and Helen Newberry Joy Hospital.

Started in 2004, the Side-Out Foundation helps people with breast cancer regain control of their lives.

Founded by Rick Dunetz, a high school volleyball coach whose mother was diagnosed with stage IV breast cancer, Dig Pink started as a way to tell his mother’s story, and the stories of all those metastatic breast cancer, through dedicated volleyball matches across the country.

These volleyball matches are still a central program of the foundation.

Also benefiting from this year’s fundraising, Shirley’s Angels Mission is a 501c3 non-profit organization with roots right here in the U.P. It was created to help those diagnosed with breast cancer. The mission promotes breast cancer research and outreach including education and support for those who desperately need it.

“It was created by Stacy Morrison and Shannon Laatsch when their mom, Shirley, got breast cancer, and subsequently died,” said Shirley’s Angels member Kristin Derusha.  “Through the years they have raised money for any kind of breast cancer research and gave support for people who have been diagnosed.”

Though the group used to be more local, Shirley’s Angels Foundation has branched out and has their main office in North Carolina.  “There’s the crew in North Carolina and those of us here in the U.P.,” explained Derusha.  “When we find out that someone is diagnosed, we send them a box.”

Shirley Lawrence and her husband, Rudy, raised their children in the Germfask area. She was diagnosed with breast cancer in 2005 and died in 2006.

Helen Newberry Joy  will receive a portion of the funds to purchase a blanket warmer for the hospital’s cancer infusion room.

The CTE health class, consisting of four Newberry and Engadine volleyball players, presented a check to the hospital on Tuesday, December 13.